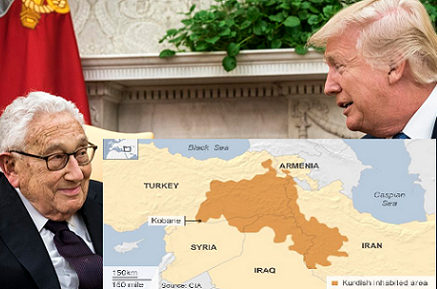 “Every country now has to consider two things:One, their perception that the previous president, or the outgoing president, basically withdrew America from international politics, so that they had to make their own assessments of their necessities. And secondly, that there is a new president who’s asking a lot of unfamiliar questions. And because of the combination of the partial vacuum and the new questions, one could imagine that something remarkable and new emerges out of it.” -Henry Kissinger during an interview with CBS New December 18th 2016

Henry Kissinger betrayed the Kurds in Iraq after years of arming them in 1975. A new power was on the rise in the Ba'ath party in Iraq. A young leader named Saddam Hussein was murding his way to the top at the behest of the CIA and better relations with Iraq were on the way. He was the speeding bus that the idea of an independent Kurdistan had been tossed under.

Winston Churchill put the wars of the 20th century, large and small, in motion every time his pencil touched a map, which was often. When carving the corpse of the Ottoman empire, he ensured that what could be Kurdistan was let inside Syria (then owned by France), Iraq (where Churchill had used poison gas on rebels), Iran (in the British sphere of influence but increasingly friendly to the USA) and the militarized rump ethnostate that called itself Turkey as it began it's genocide of the Armenians. This was not an accident, it was a potential dagger at the back of all four nations should they step out of line. Churchill liked the idea of the Anglo-American ethnic superstate, which is why he included the USA in his four volume epic A History of the English-Speaking Peoples. Knives at the backs of smaller nations are free for any white man to use at will.

Churchill's influence on the history of the world in the early twentieth century can only be compared to the power that Henry Kissinger wielded in the late twentieth century and still wields today. As National Security Advisor, his back channel negotiations caused the Vietnam war to continue long enough for Nixon to win as a “peace candidate.” He is still alive, older than Jimmy Carter, who he preceded in power, but is still wielding power behind the scenes as always. He engineered a deal with China that is one of the two central facts of the world economy today. The other is the petrodollar, which was also his creation. Both are in factors in the betrayal of the Syria Kurds to Turkey.

That does not mean Donald Trump does not mind getting a hotel in Istanbul out of the deal. The man does love a real estate swindle, but Turkey gets the Kurdish blood that Turkey wants because it is in American and Russian interests and not in the interest of China.

This seems out of step with America's general pro-China direction of the last almost five decades, but it is not because the world has changed. The Sino-Soviet split and China's achievement of the two things that matter, a UN security Council Veto and nuclear weapons capable of striking other major powers, made it a superpower at the time of the first meetings between Kissinger and then Chinese foreign minister Chou En-Lai in 1971. Three superpowers creates a different set of game theory power equations than two superpowers do.

With two superpowers, the conflict relationship is simple. Either they wish to openly fight or they and one overcomes the other or they batter themselves beyond the ability to fight. In a three way conflict relationship it benefits two parties to ally to weaken a third if it is dominant or contain it's growth if it is in second place. George Orwell foresaw this exact state of affairs on nearly this exact map in his 1948 book 1984. So-called Oceania exactly conformed to Churchill's “English-Speaking Peoples” he wrote so fondly about from the 1930s to the 1950s. Another oil war, which we call the second world war, distracted him in the middle. Eurasia and East Asia, which Oceania alternately “had always been at” war or peace with, are analogous to the totalitarian states that rule Russia and China respectively both then and now.

Turkey is the cats-paw to deal with China. From an American (and Russian) perspective Iraqi oil must flow west, away from China and India, rather than east. With Iran effectively embargoed, the price China pays for oil and gas increases. Since the price must be paid in American dollars, Trump's trade war with China becomes more painful. The fate of the American farmer is not a consideration is this calculus.

Russia would love to have it's own pipeline in Syria and a warm water port in the Mediterranean Sea. They have wanted the latter since Istanbul was Constantinople and they were happy to have friendly relations with the Byzantines empire. Genghis Khan and his heirs swept in from East Asia and disrupted that. Not achieving these historic goals immediately is something the ego of a Russian leader, even an ego the size of Putin's, can survive. There is still money to be made at Chinese and Europian expense.

If the price that China pays for oil from the Middle East climbs, that in turn creates space for Russia to raise it's own prices, boosting it's foreign exchange and fueling it's economy at the expense of Chinese workers and German banks.

The fate of the Kurds has been linked in American media to their “help” to us in fighting ISIS. They did not fight ISIS because they wanted to curry American favor. They fought ISIS in order to survive. The United States, always happy to fight any war with our own air force and someone else's army, was happy to take pot shots at ISIS from the air while the YPG wrestled in the dust with knives. This author saw the writing on the wall even then. Later, the United States came to see the YGP as the only troops that were capable of facing ISIS as a credible force. Josepth Votel (Gen United States Army ret.) wrote in the Atlantic two days ago:

“Mindful of the need for credibility as it pushed to liberate Arab-dominated areas, the YPG had succeeded in incorporating Arab units into its structure as a united Arab-Kurd fighting force. That force, the SDF, went on to liberate the so-called capital of the caliphate, Raqqa, and towns in the Middle Euphrates River Valley, culminating in the territorial defeat of ISIS in Baghouz this past March.

Over four years, the SDF freed tens of thousands of square miles and millions of people from the grip of ISIS. Throughout the fight, it sustained nearly 11,000 casualties. By comparison, six U.S. service members, as well as two civilians, have been killed in the anti-ISIS campaign.”

Soldiers often have a greater sense of moral solidarity than politicians. Soldiering as a profession requires honoring and valuing allies. Politics as practiced in Oceania require betraying them at regular predictable intervals. This is why Votel is both retired and free to criticize a sudden policy shift by an already unpopular president. Like George W. Bush, Trump's job for the American empire is to do unpopular things. The president that follows an unpopular president has the job of institutionalizing those policy shifts. Looking at you Bill Clinton. Looking at you too Barrack Obama.

According to Votel, who was in charge of fighting ISIS as commander of CENTOM until March, 9,000 local and 2,000 foreign ISIS fighters remain in detention in areas under SDF and YPG control. They will escape in droves if the forces guarding them are forced to move to fight the very real threat of the Turkish army.

11,000 freed soldiers would constitute a complete reboot of the ISIS movie franchise as fast as Sony can re-invent Spiderman and kill Uncle Ben again. Just like Sony profits no matter how bad the movie every time, America always profits from restoring “regional stability.” When Turkey gets tired of it's genocide games and heads home, ISIS will be back and America will be back fighting them in Syria and Iraq.

All of this serves as an economic pressure valve that regulates the world's oil supply, and therefor the world's currency, in favor of the value America would like it to be at.

The Kurds were a tool in this and now a different tool is need, they will be discarded for another half generation and allowed to minimally survive when Kissinger and his heirs see fit. “Fuck 'em if they can't take a joke” is the punchline again.

[Editor's note: The author has two friends who are fighting with or have returned from fighting with the YPG. He has not been in contact with either since before the crisis began and he wishes them the best.]