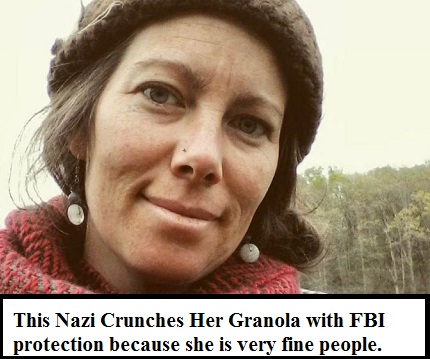 Sarah Dye is a nazi. She dresses like a new age hippie. She runs an organic sustainable farm. Her web presence is so soft spoken and crunchy I had to wipe the essential oil off my screen. Do not let her sustainable regenerative agriculture front fool you. Sarah Dye is a member of Identity Europa, a violent neo-nazi organization. Fox News 59 of Indianapolis let her slide with calling herself an “Identitarian,” which is the new soft sell buzzword for white nationalist. Online she goes by “Volksmom” and she and her partner, Douglas Mackey run an organic farm called Schooner Creek Farms.

Two members of Identity Europa, Nolan Brewer and his then-underage wife, vandalized a local synagogue in Indiana. They then proceded to have dinner at Schooner Farms. Brewer of course confessed all these connections to the FBI prior to his sentencing on hate crimes charges.

Sarah pushes her produce and home spun clothing at farmers markets around South East Indiana. Her presence at the Bloomington Community Market is what got her some resistance. Local anti-fascist groups began to protest her presence there in July. One was arrested for trespassing because protesting is not allowed.

The very next week Sarah Dye had protection from armed members of the three percent militia, there to protect her rights to be a nazi shepherd granola muncher. They were not arrested, because armed fascists with guns are totally okay at a farmers in Bloomington, but speaking out against fascism is not.

The City of Bloomington defended itself the same way France and England defended the territorial integrity of Czechoslovakia. In other words they surrendered without a fight. Following a confrontation on July 29th, they closed the farmers market for two weeks because of the potential for conflict.  The city claimed they wanted to make the farmers market more “inclusive”, which means silent on the issue of hate crimes and armed militias.

During those two weeks the federal government and local police stepped in to help the fascists out. On August 14th, the two year anniversary of the “Unite the Right” nazi marches in Charlottesville in which members of Identity Europa and other nazi groups killed one person and injured dozens, the FBI began visiting people's homes.

At least ten anti-fascist activists were paid visits by FBI agents in Bloomington, South Bend and Indianapolis. In Bloomington they were backed up by Indiana University Police because leftists should be intimidated off campus to make the world safe for synagogue burning nazi organic farmers. The FBI did not get their questions (whatever they might have been) answered by anything but slammed door.

According to the National Lawyers Guild Virginia chapter the FBI also targeted anti-fascist activists in Virginia during the same week with questions about how neo-nazis might have had their rights violated in Charlottesville in 2017. The ACLU of Virginia has been silent on the matter since tweeting in support of fascists rights to self-defense within minutes of Alex Fields driving his car into a crowd and killing Heather Hyer.

Donald Trump has called fascists “very fine people” and tweeted last week that he intended to officially label anti-fascism as terrorism. This is the context of the surrender of the City of Bloomington and the wave of visits by the FBI.

The FBI is not investigating any crime or conspiracy. Their visits are an intimidation tactic being used ahead of a general crackdown to make America safe for fascists again, and therefore great in the eyes of Trump