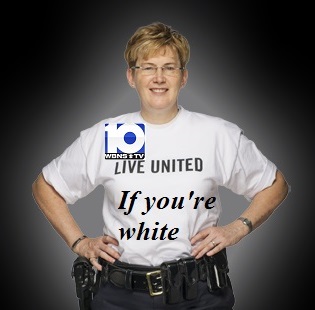 “We do not come to this plaza to mourn where he fell, we come to you, we return to the living. There were others before him remember? Yes, you remember. But then the blood was hidden, it was so far. The South's rain washed it from the Earth, far far away. The People's death was as it has always been, as if no-one had died, nothing. As if they were stones falling to the Earth. or water, falling, over, water.” – Suheir Hammad from “Fourth World War” a documentary by Big Noise Tactical Media, 2003

10TV, a Dispatch property, reported on a July 10 “Peace and Healing Rally” held at First Church of God on Refugee Road. Their coverage was typical for a company so firmly integrated with city hall they might as well be on the organizational chart under “police public affairs” right next to Sgt Richard “Dick” Wiener. This peace and healing rally featured the Mayor and the Chief of Police. There were many self-described community leaders in attendance along with dozens of police officers.

The rally was about “sympathy and empathy for the Dallas police officers killed this week, and for the families of Alton Sterling and Philando Castile” According to 10TV. The article failed to mention the recent police murder of Henry Green V in South Linden last month. Never once did they #sayhisname.

Green's family along with their attorney Sean Walton found out about the rally at the last minute and attended. They managed to get the attention of Senior Pastor Bishop Tim Clarke. Clarke managed to shoehorn the family some speaking time at the end of the rally for which Walton generously thanked him in a statement to the Mockingbird.

The 10TV article made no mention of Green's family being in attendance or speaking. They did not quote his mother Adriene Hood. The closest they came was quoting Tim Clarke "Columbus cares. Not just about what's going on in Columbus, but in Dallas, Louisiana and Minnesota and wherever people are hurting,” Clarke said.

The media continued to erase Green's memory by not saying what is “going on” in Columbus and not mentioning his name. He has been made into a non-person. If he never lived, he never died, like water, falling, over, water. This mirrors the attitude of the City and County Administration. Ron Obrein was not even at this particular “healing” rally, perhaps somebody offered him another prison labor sandwich.

On the same weekend, hundreds of people attended multiple events in protest of Green's death. At one of these events, Walton read the three paragraph letter that has been the City's only communication with his family. That letter simply outlined their procedure. At the same event, Adriene Hood recounted to the crowd the fact that she had not seen her son's body and was not even permitted to know how many times he had been shot.

The Editorial efforts to silence any mention of Henry Green mirror the holding of shooting survivors incognito in Grant Hospital. No column inches have been wasted by the media there, but generous effort was given to help the Chief of Police advance the City's program of whitewashing on with one hand and stomping down with the other foot.

The article editorialized right around a quote by Jacobs saying "We are very appreciative of the support that we get from our community, but we understand there are questions and many other things. I want to reassure you that we are all in this together,” Chief Jacobs said. Together in Columbus at the service of healing, people left with a renewed hope for change, knowing all lives matter."

Somehow, the racist tagline of “All Lives Matter” got snuck in there. All lives matter is commonly see as short hand for Blue Lives Matter, a media campaign to equalize the violence in society. Deaths of civilians at the hands of police are at a 40 year high while police deaths are at a 40 year low.

My question for the Dispatch, Mayor, Prosecutor, 10Tv and police is “If all lives matter, why can't you #sayhisname ?” How can this article not contain two simple words that comprise three syllables and ten letters? Here you go, I'll do it for you. #HenryGreen.