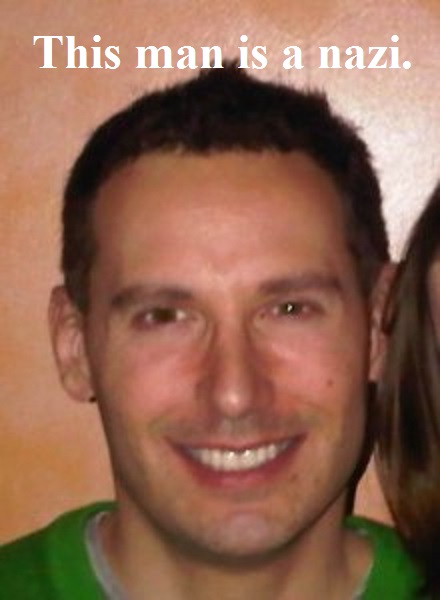 Joel Marasco is a white supremacist. There is zero doubt about that. He has been photographed at white supremacist events. He is a member of a white supremacist organization called the Council of Conservative Citizens. These people count South Carolina Church Murderer Dylan Roof as one of their members. He has been sighted by the press at fascist conferences talking with members of every hate group that has recently made a headline. He is also a public defender in the most culturally and ethnically diverse city and county in New Jersey and one of the most ethnically diverse in the state.

If one can not see the obvious cause for him to not work there one should stop reading this and go look at kitten pictures, because one would be morally illiterate. Marasco is a particular kind of nazi, the kind that is also a corrupt state agent. He has used his office to pursue criminal charges against journalists and activists that merely point this out. Ironically he is attempting to use New Jersey's hate crime law.

Daryle Lamont Jenkins is the Founder and Executive Director of the One People's Project, and nearly 20 year old anti-hate group. He has published articles detailing the sordid lives and shenanigans of every identifiable member of every hate group since the waning days of the Clinton administration in two online publications, the Rogue's Gallery and IdaVox. Needless to say that a rising star in America's hate circles with a prominent criminal justice state job in his home state of New Jersey will get attention.

It's not as though Jenkins is some tenacious blogger endlessly plugging away in the midnight hours. He is slated to be played by MCU alumni Mike Coulter in the soon the be released feature length movie Skin. His life gets threatened by nazis daily. This nazi wants to put him in prison.

Because Marasco's entry in Jenkins Rogue's Gallery includes the desrcriptors “White” and “Italian” the former has sought to have Jenkins indicted and tried under the felony hate crime statue for cyberbullying and stalking. Thus a journalist is not being sued civilly but prosecuted personally for publishing true facts about a public servant. Marasco appears white. He has an Italian surname in a place where many people claim some Italian immigrant ancestry. He is most assuredly a fascist and a white supremacist. That fact is as plain as the treads on a panzer.

This legal maneuver to silence journalists critical of the white supremacist movement is the latest evolution of an expanding tactic. Recently, Proud Boys Founder Gavin Mcinnes sued the now floundering Southern Poverty Law Center for defamation because they called the fascist group a hate group. That lawsuit followed on the heels of a 5 months ordeal that this author went through at the hands of McCinnes's former lackey lawyer in Texas – Jason Lee Van Dyke. In both cases the suit is or was built around the claim that the Proud Boys are not “White Supremacist” but instead are “Western Chauvinist.”

The suit by Van Dyke against this author and publication was dismissed. Prior to that suit, Van Dyke was sued another publication for informing a prosecutor's office in Texas of his white supremacist ties. Both that case, and Marasco's latest use of the court system show a clear pattern of fascists seeking employment in the criminal justice system in order to weaponize the law against journalists and political opponents.

Jenkins is self supported and his work and the operations of the One People's Project are funded by small donors despite his many media appearances and the fact that actual stars will play him in actual movies about actual issues.

Jenkins has set up a go-fund me to fund his legal defense. It is clear that Marasco is not going to leave this journalist and activist alone and just go back to looking at posters of Mussolini and touch his little fuhrer. As comically tragic this all is, the optics of a white public defender in a majority non-white district using hate crimes laws to silence a black journalist on the other side of the state from him are as full of irony as any tale could be. Yet this is the new American normal.