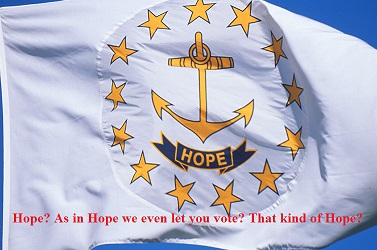 The recent primary was a complete fiasco with DNC central committee in the loop as it happened. During the day's developments, more members were added to the email chain. It all began with and email from Eric Warner to the group “New report shows RI gov't opening only a fraction of polling locations: [link] Bernie leads Hillary by 4 in the latest poll:[link] If she outperforms this polling, the Bernie camp will go nuts and allege misconduct. They'll probably complain regardless, actually.” The immediate concern was not to get out the vote, but with making sure that Sanders lost quietly.

The Rhode Island election process was structurally dysfunctional. The Chair of the Board had stepped down and not been replaced. The Vice Chair was acting chair and not ruling on motions for a new chair election. The Executive Director had been suspended the month previously for attempting to replace the old voting machines with new ones behind the entire boards back. Both the proposed new and existing old machines were made by Election Systems and Solutions, a company previously involved in attempted election fraud.

As the DNC noted, elections are run by a State Board of Elections, not the Secretary of State as in other places. That board is appointed by the Governor of Rhode Island, Gina Marie Raimondo. Prior to her government service Raimondo Senior Vice President for Fund Development at the Manhattan offices of Village Ventures, a venture capital firm backed by Mitt Romney associated Bain Capital and Highland Capital Groups, a Silicon Valley firm based in Menlo Park CA.

The first thought was to get Rhode Island Secretary of State Nellie M. Gorbea to intervene. Gorbea is also Vice Chair of the DNC Platform Committee which shot down almost all of the platform planks favored by Sanders delegates. As the email chain outlined “We've got a pretty close relationship with Nellie. Eric, what are you suggesting by way of an inquiry?”

The inquiry they were planning was entirely for show “Was thinking a letter so that if press asks us about it, we can show we are responsive and active. If we're crying foul in AZ, we might need to do the same - at least nominally - in RI so we don't look like hypocrites” Again the email chain shows zero concern for voting rights, simply concern for that they would not “look like hypocrites” if Hillary came out ahead in an election that Sanders was favored to win by a margin greater than an exit poll margin of error.

The only way for Hillary to achieve victory under those circumstances is to deprive voters of their right to vote and the only way to do that is not open the polls. Respondsibility for the Board of Elections being unable to function or even meet during an election falls on the Governor who can appoint replacements. Should that Governor and Board fail, it would fall to the Secretary of State.

In this case both the Governor and the Secretary of State are pro-Clinton superdelegates. The one most closely connected to the mechanisms of actual voting is an anti-Sanders committee Vice Chair. The other is a venture capitalist linked to a former Republican candidate.

The DNC was most concerned with appearing concerned about a situation that their own members created far in advance. They showed zero concern, privately and in their own words, about the rights of citizens to even cast votes if those votes did not favor their candidate by the margin they wanted. The email chain is linked below: