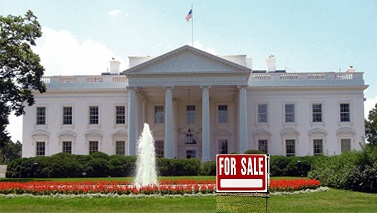 The recently released DNC emails provided yet another gem today. Former Congressman and current lobbyist Chet Atkins paid to arrange for a tour of the West Wing of the White House. In an email exchange with Democratic National Committee Finance Chair Jordan Kaplan a lobbyist made a pitch on Atkins behalf.

Can you investigate whether we might be able to jam five people into the White House on either Tuesday, May 17 or Thursday, May 19 for a tour? This is for Chet Atkins who is one of our donors in MA and who raises checks as well. Let me know if this is a possibility and we'll break the good (or bad) news to them.

Chet Atkins is a former Congressman and like Micheal Pratt a lobbyist and political consultant. Presumably the others named are big dollar donors. Neither Atkins nor Pratt are on the DNC. Thus the term “our donors” refers to a different “our.” I'll presume this means the Clinton campaign directly or the Hillary Victory Fund super PAC, as the DNC Finance Chair would already know the names of five important donors who give checks to a former Congressman.

Following the money then in this case means a check for Clinton is bundled in Massachusetts by a former Congressman who contacts another lobbyist. That lobbyist then contacts the Chair of Finance for the Democratic National Committee to arrange a private tour of a secure government building.

Thus key government resources, including access to the White House are being traded for donations to a private political party and/or candidate. Not one person in this email chain works for the Government of the United States or is directly accountable to the people of the United States. Yet they are empowered to trade public resources for private monetary gain.

There is a raw arrogance for a candidate who is not yet president to even think to trade access to the White House, which is mostly an office building where the work of the executive branch is performed, for cash.

The size of the checks is not disclosed, but it is ultimately immaterial. Private citizens paid other private citizens for access to public resources. This is what corruption looks like.

[Editors Disclaimer: Chet Atkins is a 1966 graduate of Antioch College, which is also the author's alma mata. The author has never met Chet Atkins at any alumni function and had no knowledge his schooling background until researching this article. They have never interacted in any way.]