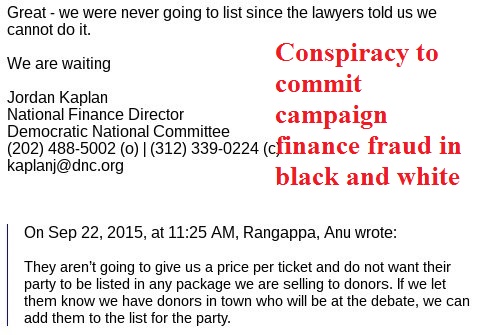 It was noted by media organizations not fully integrated into the establishment that the Washington Post ran 16 negative articles on Bernie Sanders in 16 hours between March 6th and March 7th during the Democratic party debate in Flint Michigan. This biased media coverage is part of a long standing quid-pro-qua between Washington Post Owner Jeff Bezos and the national security establishment of which Clinton is directly part as a former Secretary of State and long time friend of self-described swinger and former Playgirl Centerfold Henry Kissenger. Recent internal emails released via Wikileaks show that this relationship extends to illegal campaign fundraising.

Walking backwards through time one can see the relationship grow and the gifts between lovers get exchanged. Prior to the negative media campaign that seems to have culminated in the March barrage against Bernie there was a quiet fundraiser held off the books in Late September 2015. As can be seen from the screenshot of an email at the top of this article, DNC finance chair Jordan Kaplan, knows that this is illegal and so do his lawyers.

This campaign money laundering could be seen as payback for Clinton awarding Jeff Bezo's other small business concern, Amazon.com, a 16.5 million dollar contract for Kindle readers as part of a state department “global learning initiative” where America builds “learning centers” to indoctrinate children in the third world. This is in addition to the money spent paying “friends” to “like” the United States on Facebook from 2011-2012 as part of a public diplomacy plan.

The 16.5 million dollars in 2013 from the State Department is a small amount compared to over $600 million contract Amazon was awarded in 2012 by the CIA to provide secure cloud data storage.

Ardent Libertarian turned national security welfare Queen Bezos rolled his $616.5 million in government checks into a new investment in the summer of 2013. He spent $450 million buying the Washington Post. One wonders if he was positioning himself to influence the election for his friends in government.

If the quid-pro-qua is not obvious enough, the Washington Post buyout deal was negotiated in secret by the venture Capital Fund Allen and Company, which is managed by Former CIA Director George Tennet. Tennet was appointed to his post as CIA director by President Bill Clinton.

Going back a few years we can now walk the chain of events forward. First, the CIA gives a contract to Bezos's company Amazon. Second, the State Department gives another contract to Bezo's company Amazon. Third, Bezos uses the money to buy the newspaper that broke the Watergate scandal within two months of them reporting on the first leaks by Edward Snowden, thus guaranteeing that Woodward and Bernstein's successors would never be from within the beltway again. Fourth, that newspaper illegally raises campaign funds for the former Secretary of State that gave them the contract. Fifth and finally Bezo's company attacks his backers political opponents like a rabid dog on crystal meth at a critical moment in the campaign.

Whatever line existed between media, a political party, the national security establishment and the tech titans of Silicon Valley has officially been blurred to non-existence. The money exchange alone causes this saga to leave CNN's insider information trading in the minor leagues.