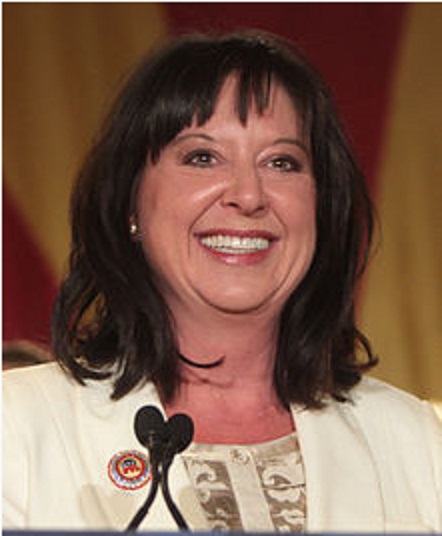 Because she is slightly pro-choice and slightly in favor of gay marriage, she got a boot to the curb from her party and is serving out a lame duck term. This has not impacted her loyalty or her racism or her willingness to disenfranchise non-white voters.

Reagan, who loves a good state level anti-immigration law. She was a supporter of Arizona's SB1070 (passed in 2010), which was so vicious a racist immigration crackdown that even the Supreme Court struck it down. It was written in part by the American Legislative Exchange Council (ALEC), as model statewide legislation as the “No Sanctuary Cities for Illegal Immigrants Act.” It made it a crime to rent housing to, hire, or even have an undocumented person in your car. It was written in part by private prison companies such as GeoGroup and Core Civic who hoped to profit from additional unpaid slave labor.

ALEC also sponsored the Voter ID act, which is model legislation designed to create more stringent ID requirements specifically to target the poor, the elderly, immigrants and non-whites people. This is the model used in North Dakota to disenfranchise Native voters. Michelle Reagan, as a member of ALEC, loves this bill and enjoys enforcing it.

Reagan uses crosscheck, a voter id platform to purge Arizona's voter rolls. Crosscheck is used in many states, including Georgia and Nevada, as a way to keep people from voting in two states on the same day by removing people with similar names. This targeting is racist. According to an analysis written by Greg Palast for Rolling Stone magazine “This inherent bias results in an astonishing one in six Hispanics, one in seven Asian-Americans and one in nine African-Americans in Crosscheck states landing on the list.”

Crosscheck was commissioned to be written by Kris Kobach, who is has worked with ALEC to implement this software in as many states as possible. Kobach is also the Secretary of State for Kansas and Vice-Chair of Vice President Mike Pence's so-called voter fraud commission, which was set up to disenfranchise as many people as possible.

By using Crosscheck, Michelle Reagan has removed at least 258,000 people from Arizona's voting rolls. While that is only seven percent of the total number of registered voters in the state, it disproportionally targets working class people and people of color located in urban Democratic districts. Assuming that 90% of those voters who were purged would have voted Democrat, this removes twenty one percent of registered Democrats in a few targeted areas.

This targeted suppression imperils the seats of Democratic incumbents in the 1st, 3rd, 7th and 9th districts and thus the blue wave has hit a software breakwater yet again. The Democratic Party has again issued neither rhetorical or legal challenge to the use of this software with built in racism in Arizona. This mirrors their failure to do so in other states.

While Reagan fell on her sword rather nicely, and is sure to be rewarded with a high paying lobbyist job somewhere after her even less moderate successor takes office, the effects of her racism will shape the political landscape for years to come. She has done her part to keep minority rule in place in the part of the country that ALEC entrusted her with.

Should she choose to reinvent herself, she is exactly the kind of Republican that the Democratic party hopes to gain as a member through cross aisle bipartisanship and continued appeals to the shrinking demographic of closet racist voters in the suburban South of America that nurtured the political career of such champions of human rights as the recent failed Democratic party presidential assignee and admitted war criminal Hillary Clinton.