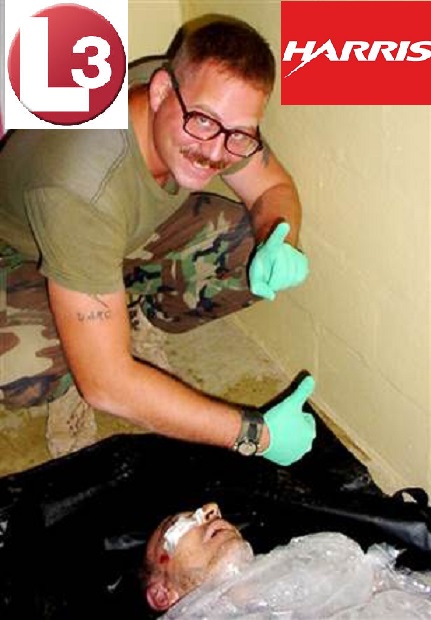 Republican conspiracy fetishists love to talk about a deep state family without talking about all the corporate cousins. If someone were to discuss the deep state with any level of rigor they would come away with the impression of an interlocking network that includes a vast seas of corporate power within it's globe. When the military industrial complex is mentioned, the focus of overlap examination is on the revolving door between the floors at the top. What is left out when this is considered are the connections between various entities in the banking intelligence complex. This weekend's quiet merger between Titan/L-3 Communications (NYSE: LLL) and Harris Corporation (HRS), which was brokered by Morgan Stanley is once such overlooked change in the family portrait.

The full-stock equal merger makes the resultant entity will be the 6th largest defense company in the U.S. and a top 10 defense company globally, according to the Warren Buffet owned media outlet Businesswire. The combined company will be called L3 Harris Technologies, Inc.

In 2015, Harris acquired Exellis, formerly a division of CIA contractor ITT. That merger was the largest in the defense industry since the one that created Lockheed Martin.

The impacts for domestic surveillance did not make the business press. Harris technologies is the lead manufacture and pioneer of cellphone spoofing devices, or Stingrays, which are a major component of foreign and domestic spying operations. They also make night vision goggles, GPS technology, surveillance systems and provide data encryption services to all four armed forces and the Department of Homeland security. The FBI, Drug Enforcement Administration (DEA) and Immigration and Customs Enforcement (ICE) are among the 53 law enforcement agencies in 21 states, use these devices.

Harris, when selling their surveillance systems, require clients, like state and local governments, to sign non-disclosure agreements. These agreements have been explicitly used to circumvent public records laws and discovery in criminal cases. This has resulted in lawsuits against the clients and the vendor by the American Civil Liberties Union (ACLU) and the Electronic Frontier Foundation (EFF) and the Electronic Privacy Information Center (EPIC). These suits shed a sliver of daylight on the use of the devices, the lies to the judges and the secrecy but did not end the practice. The FBI definitely deployed Stingrays from aircraft during the Baltimore Uprising in 2015 specifically to thwart protest against police murder.

L-3 Communications itself is a large conglomerate with a human rights record that would give give the any Chicago police interrogator a bigger erection than a night of putting electrodes on suspect's genitals. An L-3 employee raped a juvenile prisoner in Abu-Gharrib, was revealed in official reports, and not even fired but transferred.

L-3 Communications has a contract as a preferred vendor for license plate readers in the State of Ohio. They are the number two manufacturer of police body cameras an are linked at the founder and management levels with the number one vendor facial recognition software.

L-3 Harris technologies will instantly save $500 million before taxes in revenue and over $300 million after taxes. Their first year profits are projected at $1.3 billion and they expect this number to rise to $3 billion within three years without additional contracts.

The combined revenue now of two companies is $16 billion before taxes and profit taking, thus they expect to increase their profit margin from 8 percent to 18 percent. That is a doubled profit from the seamless integration of GPS systems, surveillance cameras, police communications, cellphone eavesdropping and torture. A significant part of their business, profit and human rights violations will be domestic, as they have been under the administrations of both major political parties.

This quiet merger, which was by no means small, has huge business implications for the defense industry and the intelligence community. The human rights impact of a corporation that profits directly from torture, listens on cellphones, and makes police body cameras while working with the FBI to suppress anti-police protest should not go unnoticed. There will be fallout, new product lines and new business synergies that will build an increasing profit margin directly from the blood of the public at large.