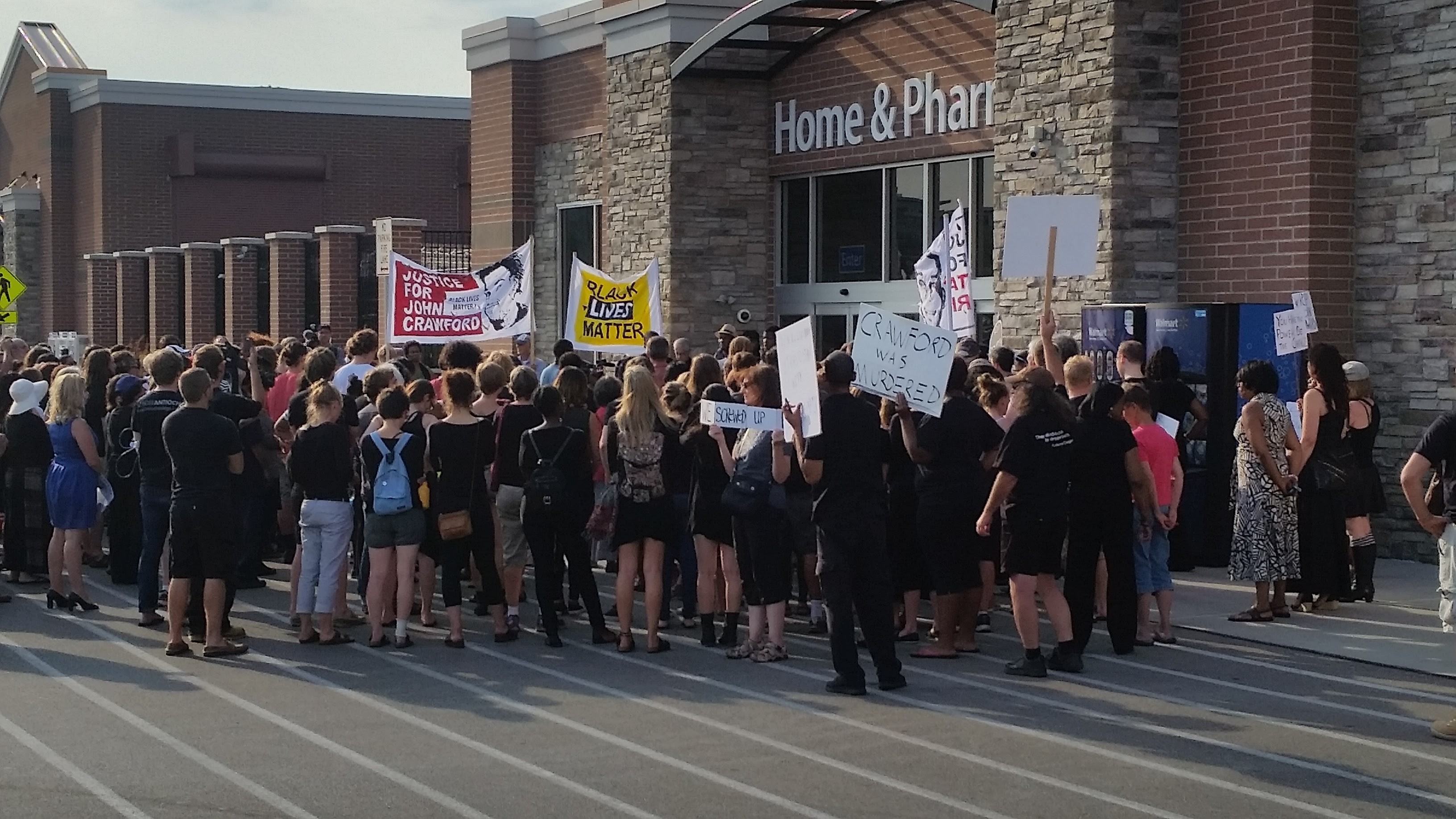 Demonstrators marched from the street to the front door of the store, carrying an empty coffin. The coffin was laid at the doorstep, while they chanted and held a three-minute "die in" outside the store entrance to protest in silence.

Ohio Open Carry had also planned to have a demonstration starting at 5 p.m. to “remind the nation that open carry is legal and that police are not above our most basic human rights,” according to the group’s Facebook page. A handful of members of the second group protested at a distance.

John Crawford III was shot last Aug. 5 after another shopper, Ronald Ritchie, called 911 to falsely report that he saw a black male waving a rifle at people including women and children. The Beavercreek Police Department released the interview with Ritchie, where he acknowledged to a detective that the claims he made to 911 call were not true. He admitted that Crawford never shouldered the replica weapon.

However, the police responded swiftly to the call, and in a matter of minutes John Crawford III was dead, shot twice by police who claim that he didn't respond to their orders to drop the weapon.

It was later learned from Walmart surveillance video footage that Crawford had picked up an air rifle from a shelf and walked around the store with it, talking on the phone. Other shoppers passed by him without showing concern or even seeming to notice him or the toy gun he held.

Security video, which attorney General Mike Dewine initially refused to release, also shows that he had only a fraction of a second to react to the police before he was shot. Despite turning his head toward the yelling officers, the rest of the Crawfords’s body remained facing a shelf. An autopsy confirms that the bullets were fired at the suspect’s side.

Another shopper, 37-year-old Angela Williams of Fairborn, died of cardiac arrest in the commotion after police ordered everyone out of the store following the shooting.

Ritchie has never been arrested for making false claims in the 911 call, despite clear evidence nearly everything he said to the operator was false.

John Crawford Jr, the father of the victim, told the Guardian UK that “He was the catalyst, if you will, in the whole sequence of events leading up to my son’s death,”. The elder Crawford continued “...He excited the call, and exaggerated the call, and frankly it was just a bunch of lies.”

Michael Wright, the attorney for the Crawford family, added that Ritchie “should be questioned on why the footage and what he said does not match. He’s basically lying with the dispatchers, he’s making up the story. So should he be prosecuted? Yes, I believe so.”

Officer Sean Williams — who remains on paid administrative duty while awaiting a U.S. Department of Justice review — shot Crawford, 22, claiming that the Fairfield man ignored two commands to drop the BB/pellet rifle he had picked up from a store shelf. The surveillance video of the shooting, shows John Crawford III, who was on his cell phone with the mother of his children, had .33 of a second to react to any commands. A grand jury concluded the shooting was justified. Federal authorities are still reviewing the case.

This shooting, along with other high-profile cases involving people who died at the hands of police, has sparked a national outrage against police brutality. citizens all over this country from all walks of life are coming together, as they did in Beavercreek this week, and demanding justice for the murder of unarmed black men in what appears to be a new civil rights movement.