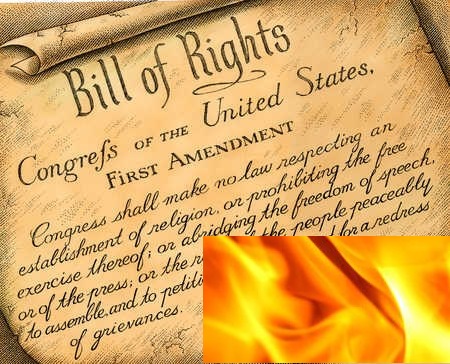 Although CNN reported on August 11th that there was a circulating draft of an executive order to censor social media in order to make it more “fair” for “conservatives” and the network has claimed to be in possession of the text, they have yet to release it. Many news outlets, both large and small, have commented on the order, almost uniformly in the negative. Without the text they are mostly doing so without any real knowledge, and are speculating, with input from their picked legal scholars on a draft. In a sense, this is a prime example of Trump's endless distractions and gaslighting mixed with a generous portion of welfare for pundits and opportunities for editorial boards to wrap themselves in the first amendment and phone in a few column inches.

It is perhaps unwise to speculate too much on the final form of this draft or proposed executive order as it is not the first draft. A rumor of a previous draft circulated last week in certain journalistic circles of a version of this order that would have vested authority in the Federal Communications Commission (FCC) rather than the Federal Trade Commission (FTC) which is a the center of the current draft. This all seems to be what the intelligence community calls a “limited hang out” in order to spur the other side or sides (which in this case are the press and the public) to proposed and prepared plans of action and opposition.

With actual speech meaning little if anything to those inside the echo chambers that carry from high rises in the 212 area code to inside the Washington beltway and back again who have selected themselves as our betters the consideration for the first revision must have been money. Putting current FCC head and former Verizon Legal Counsel Ajit Pai in charge of who gets to say what might have resulted in legal challenges from actual corporations with deep pockets. As the man who dismantled net neutrality,Pai might well have been a lighting rod for corporate pushback with deep pockets that could have well lasted beyond the second term Centrist Democrats seem hell bent on handing to Trump on a golden toilet seat.

What CNN has deigned to release to the public is that the draft order "calls for the FCC to develop new regulations clarifying how and when the law protects social media websites when they decide to remove or suppress content on their platforms. Although still in its early stages and subject to change, the Trump administration's draft order also calls for the Federal Trade Commission to take those new policies into account when it investigates or files lawsuits against misbehaving companies."

How exactly would that work in practice? Some random nazi posts something offensive, somebody reports it, and Facebook (for example) removes the offending posts. The random nazi complains that he his school shooting manifesto has been unfairly removed and the FTC files suit on his behalf. This is not how it would work.

In practice, this would lead to the mass reporting by the right wing of any content they found offensive. Where that content is not deemed offensive by anyone who thinks that same gender couples should be allowed to marry (or breathe) and is not taken down, it would then be mass reported to the FTC who would go to court to take it down on behalf of the fundamentalist who got upset when someone suggested that an immigrant child does not deserve to drink out of a toilet while slowly expiring in an ICE death camp.

While it would seem that such a small demographic that only leaves the barnyard when sexually exhausted would be easy to counter by the insufficiently silenced majority, this is not the case. Persona-management software, which is designed to make one user appear to be dozens, can quickly turn a small group into a large group. Evidence exists that such software was used to flood the FCC's site during the net neutrality public comment period before Ajit Pai slammed the gavel and did as he pleased on behalf of Verizon and the Daily Caller editor he appeared in an anti-net neutrality music video with.

Coupling persona-management software with a well funded seemingly grassroots effort can be used to crush actual grassroots organizing with just a little collusion from social media. Recently in Columbus, local activists began a campaign to expose the protection by a church group and the government of the notoriously brutal cop Anthony Johnson. Fake profiles, traced to police officers as far away as Las Vegas, were used to harrass the group, insult and intimidate its membership and then report them when they responded for over a week. This is an example of just a police union using some chat room to organize. Imagine such an effort being funded and using persona-management software to appear twenty times as large as it actually is in reality.

Having the ability to hunt all the posts on social media would require actual programing of actual algorithms. Any regulatory or court action by the FTC would open those algorithms to scrutiny and design by telecommunications lawyers who are political appointees. Thus control over what you say online to people who are your friends and your family will be censored by a computer program written in part religious fanatics and foaming at the mouth racists.

That is what Trump's executive order will bring to your online interactions. Your drunk racist uncle now has the power of government behind him and his twenty imaginary friends.