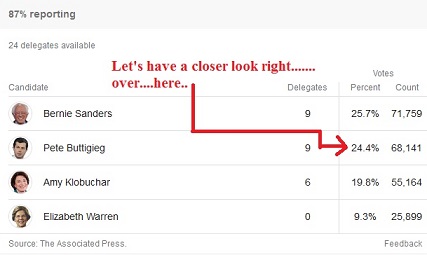 Those flaws would allow a malicious outside attacker or a partisan insider to change the numbers at the county tabulation level. The trick to changing numbers is to do so in a way that does not put the result too far outside of the margin of error of the exit polls. Prior polling can be somewhat ignored as they are often biased and unless the answer is the difference between leprechauns and unicorns the results will not arouse too much suspicion. That is what someone hoped to do on behalf of Pete Buttigieg. A closer look reveals their failure to conceal their graft.

According to the AP reporting of the published numbers at the time of this writing (9am EST Wednesday February 12th) Sanders got 71759 votes or 25.7% of the total with 87% of the precincts reporting. Buttigieg got 68141 votes or 24.7%. Both were awarded 9 delegates, which is a number we will return to later.

Breaking this result down by county leaves a much different set of results. New Hampshire has 10 counties. 7 of those counties tabulate votes the old fashioned way with human beings counting paper ballots in public. 3 of those counties (Carroll, Rockingham and Merrimack) use the previously highlighted AccuVote OS scanner -tabulator machines. Both rural and more urban counties are represented in both groups. The percentages between the two candidates should hold within one to two points. They differ wildy.

Had the percentages held across categories, Buttigieg would have gotten 8868 fewer votes. This would have changed his overall percentage to 21.2%. Speculation only enters these calculations when we ask ourselves where the stolen votes came from. If all or at least the statistically revelant amounts came from the #1 and #3 finishers, Sanders and Klobuchar in equal amounts, the results would be Sanders at 27.44%, Klobuchar at 21.5%, and Buttigieg at 21.2%. This does not seem like much of a change but it alters both the national outcome in delegates to convention (remember those?) and the narrative.

Adding the delegate numbers in both scenarios to the numbers from the also obviously rigged Iowa debacle, and you have to different stories again both in appearance and material effect. Under the official cooked numbers, Buttigieg has 22 (or 23 if you count the “undecided” in Iowa), Sanders has 21, Warren has 8, Klobuchar has 7, and Joe Biden is sniffing the hair of 6 delegates. Keeping Iowa's offense to mathematics and democracy in place and using the probable actual outcome of New Hampshire, Sanders has 22, Buttigieg has 21 (or 22 if you count the Iowa undecided), Warren and Klobuchar are tied at 8 and Joe Biden still has only six friends, two human participation trophies for each of the times he has tried and failed to be president. Using real math and not erased votes in Iowa and Sanders becomes the clear and away frontrunner and Buttigieg second while Warren and Klobuchar are in a cage match for third.

Delegates matter more in this primary season than others as the long term strategy of the DNC is to prevent Sanders of having a plurality of convention votes on the first ballot. Thus the nomination will be forced to a second ballot, where candidates can swap and trade delegates and super-delegates can weigh in for the DNC's chosen non-Sanders appointee.

The polite term for this in most places is minority rule. It is clear in two out of two contests that there has been election fraud in favor of Buttigieg and against Sanders. This is not democracy by any definition of the word.