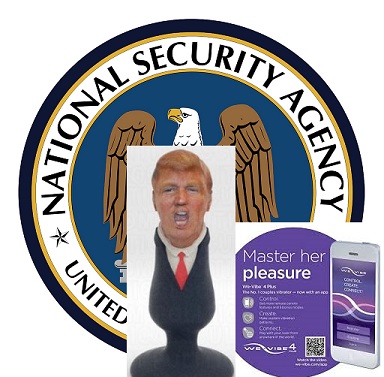 The preceding block of text, although written in generic bland legalese, is the so-called “business records” section of the USA PATRIOT act. It allows the government to seize any record from any business by claiming a terrorism investigation is ongoing. The phrase “United States person” is a common phrase in surveillance law. A conversation via phone or email stops being exempt when either party is not a “United States person” or in the United States. The NSA has used the XKEYSCORE program, which was revealed by Edward Snowden, to game this legal fiction and engage in bulk metadata collection via manipulation of cloud computing.

In March 2017 a Canadian company called Standard Innovations, through their subsidiary We Vibe, settled a class action lawsuit over violations of their users privacy. The company had been secretly collecting data on how the their products were used, including frequency, intensity, temperature and duration. The products were bluetooth enabled vibrators for men, women and couples that could be remotely controlled from a cellphone or from a partner's cellphone. There is in fact an app for that.

A further turn of the screw are the other features of the company's WeConnect cellphone app. You can of course have text and video chat with your partner while swiping to change the intensity of the toy. Thus by monitoring this app, the government can see you naked, hear your lover talking to you, read their texts, know exactly what they are doing to you and exactly how hard they are doing it. They can also gain biometric data on how much you actually do or do not enjoy it regardless of what you say. Combine this with facial recognition software and using a burner phone for your sexy time is not going to save you.

The company, which does not manufacture the not chat enabled non vibrating Donald Trump butt plug pictured at the beginning of this article, opened the door to the most invasive surveillance possible. The Donald Trump butt plug is made in America but has not yet been connected to the internet so it's intensity can not be increased during the President's twitter storms. Like the president, it just sits there in your Oval orifice being ugly when there are no handlers to guide it.

As the connected world moves toward the so-called internet of things, it should consider that some things, like intimacy between two people, are best left off the internet. The increasing collection of biometric data from all sorts wearables, and the consumptive absurdity of internet aware kitchen appliances, allow totalitarian governments to know a little too much about everyone.