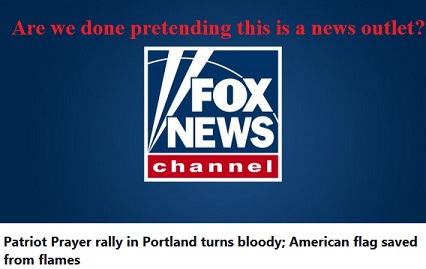 A previous rally for Kimmons, which had been attended by his family, saw police allow a driver to ram his car through the protest and speed away. Commentators on right wing outlets, including Fox News, some how twisted this into an attack on the car. 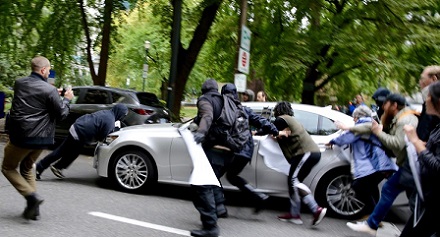 Fox News all but praised the attack which was the third police enabled attack on left-wing protestors in that city in as many months and the second such attack in the country in as many nights.

News Outlets on nearly all parts of the spectrum quickly turned the surprise event, which was set up as a “flash mob” on the part of Patriot Prayer, into a “clash” and echoed the now tired moral-equivalency line used by both Donald Trump and the ACLU of "both sides”. This of course ignores the central fact of the event, which is that the fascists marched to the vigil after chastising the Mayor for allowing it to go on.

Outnumbered, the anti-fascist protestors in the fought back against bear mace to break up the initial charge by the Proud Patriot Prayer group and their allies. As has been the case at now three events in a row, the police then deployed rubber bullets against the anti-fascist crowd to help ensure a Patriot Prayer retreat with dignity. Anti-fascists on the left flank of the action also deployed mace at the end of a rally to hasten the retreat of the enemy.

Prior to the police intervention, multiple people where kicked in the head by key Patriot Prayer members before the anti-fascists rallied to defend the larger crowd.

Twitter is currently exploding with multiple fascist and more mainstream right-wing outlets and individual activists attempting to spin the event as an attack by antifascists and other protestors on “peaceful” men marching to attack a vigil.

The messaging has also continued to be directed at Portland Mayor Ted Wheeler for somehow giving the streets over to “Soros-paid thugs.” This is despite having a known neo-nazi in a command position on the police force, police attacks in support of fascists at two events in the last two months and Wheeler's quiet green-lighting of police attacks on Portland's Occupy Ice protests earlier this year.

No arrests were made on either side, although the police were happy to show a pile of weapons, ranging from store bought through improvised to impractical and unlikely. Apparently every piece of broken brick in that ward of the city was collected, tagged as evidence for crimes nobody has been charged with after arrests that didn’t happen. This was all done for the police photo-op that connects neatly with the NYPD tweeting their tip line while they pretend to look for the fascists identified by name from multiple photos circulating in public during the companion attack in New York the previous night.

Although the messaging attempts to link any resistance to these groups having full control of the streets to the Democratic Party, this wave of attacks will continue after the midterm elections in three weeks. Several hate groups are planning multiple simultaneous events in multiple cities in the weeks follow the election and on past the winter holidays.

The Mockingbird will continue to cover these events as they develop.