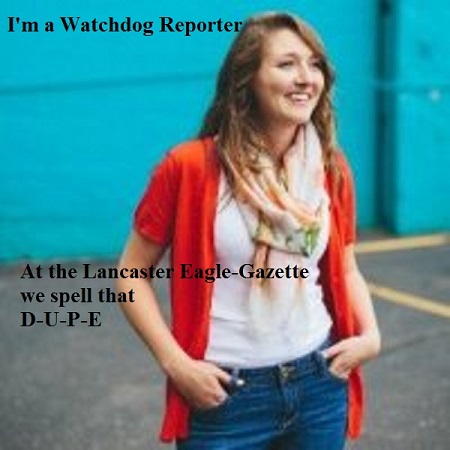 Priests claim they hear a lot of lies. I wouldn't know, I'm no priest, I'm a reporter. As a reporter, I'm also used to lies. I hear them every day. All reporters should be used to lies, we are expected to repeat them by those in power. The Mockingbird is a small time newspaper because we fact check and refuse to print lies.

When dealing with those in power there is a fairly simple equation. The higher the stakes, the bigger the lies. The weakness of the mainstream press is the habit of trading uncritical reporting for friendly access to the powerful. This weakness has apparently crippled the reporting of the Lancaster Eagle-Gazette, which is a USA Today affiliate.

At least one rape by a sheriff's deputy, one attempted rape by the same deputy, multiple relationships with females prisoners by another deputy, and a general culture of misogyny and sexual harassment was first reported here at the Mockingbird on April 28th. ABC Channel 6 confirmed our reporting eight days later on May 6th. Sheriff Dave Phalen was happy to continue to cover up the crimes of his underlings in an interview given to the latter media source. During that interview, he told or at least repeated a number of lies. We noticed and said nothing in order to preserve the identity of our sources.

Active attempts were made by the Sheriff's department to intimidate sources and their families, some of whom are no longer speaking to the media. Some sources, including those working inside the criminal justice system, are still providing information to the Mockingbird and ABC 6. Hacking attempts were made on the Mockingird's Website and multiple postings of the story were removed from Facebook under pressure. During that time the Lancaster Eagle-Gazette did not print a single word on the story.

The USA Today affiliate broke their deafening silence on May 14th with the single most one sided article I have ever had the displeasure of spitting my coffee on. The article attempted to use material provided by the Sheriff to substansiate lies told by the Sheriff. Unfortunately for Dave Phalen, he told one set of lies to Channel 6 and another to the Lancaster Eagle-Gazette.

Even if one set of his statements is true, Dave Phalen lied to the press. Neither of his statements are true. Since both statements had other statements that hinged on them, the total value of the lies is compounded. It appears that Sheriff Phalen, with the Eagle-Gazette's help, is selling four lies for the price of one. Those lies will be disassembled for the public now.

For those readers that have not been following the ongoing coverage, Deputy Jared Garren, known to readers of the Lancaster Eagle-Gazette as “Deputy A”, demanded that a female prisoner in isolation show her breasts in exchange for ice for her swollen hand and then took her to get new clothes to replace her bloodied uniform and raped her in the change out room.

The change out room has no cameras and male deputies are not supposed to be alone in the room with female inmates. Sheriff Phalen claimed that Jared Garren spent four minutes in that room attempting to unlock a locker when interviewed by ABC 6. There are no lockers in the room, only shelves with clothes, a changing area and a shower. Guards do not shower in this room, and prisoners have no need of something to lock nor are they permitted metal objects such as keys.

When dutifully parroting the deputy's lies to the Lancaster Eagle Gazette said “Deputy A told investigators he was attempting to unlock the shower door, but the key wasn’t working.”

The lies begin there. Had Spencer Remoquillo, who is the Lancaster Eagle Gazette's “Watchdog Reporter,” bothered to watch the ABC 6 report, she would have known that a shower door was a non-existent locker on TV a week before she put the story to bed. She, or more likely her editor, lacked either the critical thinking or research skills to put that together without our help.

However that the shower story is clearly no more true than the locker alibi. The reason for the off-camera trip was for clothing, not a shower. Sheriff's investigators claim there were only 4 minutes and five seconds of Jarred Garren and the inmate being off camera. This is not enough time to shower, select correct sized clothing, and change.

Further the Eagle-Gazette reported “When they return to the hallway, Deputy A has the key in his hand, and Phalen said, neither of them looked disheveled or as if something occurred.” Had the inmate showered, her hair would have been wet on the video. This statement proves both the locker and the shower lock stories are lies.

That particular line reveals much more about the Eagle-Gazette's so-called research. “and Phalen said, neither of them looked disheveled or as if something occurred.” This means that Spencer Remoquillo never saw the video. She has no way of knowing what the video shows, or if the video was altered or even how long it actually is. The Eagle-Gazette only knows what Dave Phalen says and only gets reports prepared by Dave Phalen's investigators.

Those reports were acquired by the Eagle Gazette more than a week after they were acquired by Channel 6. The reports say what Dave Phalen want them to say. Considering the threats made to sources and attempts to pull this story from multiple websites reporters are expected to say what the Lancaster County Sheriff tells them to.

The Lancaster Eagle-Gazette requested all information related to the case, and got only the reports, but apparently not the raw evidence including the video tape. This fact is alluded to but danced around in their article:

“The female inmate claimed a male deputy raped her in a room with no surveillance cameras November 27, which couldn’t have lasted longer than four minutes and five seconds, according to investigators. “

“The Eagle-Gazette requested personnel files, a video and other records pertaining to two deputies who late last year were allegedly involved in ethical misconduct with female deputies, including the deputy involved in the alleged rape. The records revealed that while the rape claim was unfounded, there were other allegations of misconduct uncovered, some of which led to verbal and written reprimands of both deputies. ”

The reader will note that “records revealed” but the length of the video was four minutes and five seconds “according to investigators.” Spencer Remoquillo did not write “the video clearly showed” because she never actually saw it. She knows better. She has won two awards for her investigative journalism, is widely published and attended a first rate journalism school. Someone further up the food chain had a claw in this article.

The verbal and written reprimands that deputies did receive for stalking inmates, having or soliciting affairs with inmates, forcing inmates to expose themselves in exchange for medical care were listed in the article. Those reprimands are personnel records and are protected from the Ohio Public Records law. This means the actual records were not released and there is no proof that any action was taken on the officers unless the Sheriff's department chose to release those records illegally but not release the video tape. Somebody in the chain of evidence is trying to have it both ways in order to deceive the public.

What the so-called records that were released did show were more inconsistencies. One of the more glarring ones is here:

“The jail’s lengthy internal investigation, along with the assistance of sheriff’s office Detective Kelli Stats questioning witnesses, determined the accusations were also unfounded.”

The jail's “lengthy internal investigation” consisted of witnesses and the survivor reporting the event. The investigation was conducted by Deputy Whitaker who interviewed the witnesses and took DNA samples from the suicide blankets kept in the storage and changing area where the rape occurred. The reports were turned in to Sergeant Boring. Sergeant Boring was the shift supervisor during the rape and was supposed to be watching the video when Jared Garren took the survivor into the unmonitored room.

The DNA evidence was neatly disappeared from the investigative narrative as well. Despite samples being taken from the suicide blankets by Deputy Whitaker, which she told sources do in fact exist, Sheriff Phalen claimed to ABC 6 that no DNA was recovered from the survivor’s clothing. Jarred Garren ejaculated on suicide blankets not clothing. Additionally, the survivor was changing clothing, which means by definition two sets of clothing were involved. Which set, if any, was tested?

Between the two sets of statements given to two different major news outlets there are a growing number of inconsistencies and outright provable lies. The Lancaster Eagle-Gazette had a week to check their information against ABC 6's so called exclusive report. ABC 6 has had five days to defend their reporting against the Lancaster Eagle-Gazette's whitewash. Neither has elected to do so, nor has either cited the original reporting here at the Mockingbird. Their lack of citation will not prevent us from assisting them with reading comprehension and follow through.