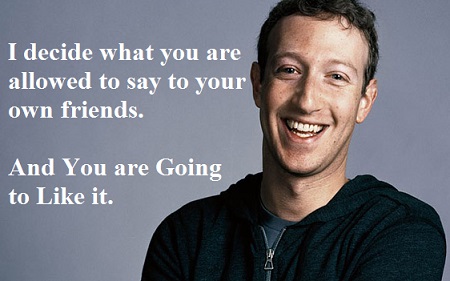 Facebook a two seemingly unconnected announcements. The first is that they would begin to take steps to keep “fake news” out of users feeds. The second was that they had implemented a censorship tool that would allow them to re-enter the 1.3 million user Chinese market. A closer look at both announcements shows that they are one in the same schemes, simply operating under slightly different parameters with slightly different bodies implementing those parameters.

Facebook's brick in the great firewall of China would allow certain items to be flagged in certain geographies for review. That review would take place by an outside group appointed by the Chinese Communist Party and should a post or news item fail their draconian litmus test it would simply be removed, never to be seen by posters friends. Simple, top-down, bureaucratic and totalitarian in practice it is a perfect fit for the black cat white cat heirs of Deng Xiaoping.

Facebook's scheme for dealing with fake news in the United States is more nuanced and has multiple parts. It is not known if it will stop or deal with all clickbait or celebrity listicles or all the other actually annoying things that are forced into user's feeds. Any user can flag any posted article as fake news and with sufficient flags it would be reviewed by a as yet unnamed third party or parties. In all probability this party or group of parties will be mainstream media outlets contracted in secret by Facebook or one or more large PR firms or lobbying groups.

If the scheme relies on mainstream media outlets it allows them to silence any fact checking or quality control of their own products. If the scheme relies on PR firms it allows those firms to suppress negative stories about corporations they represent. If done by hybrid organizations such as the Dewey Square Group (DSG). DSG is the perfect example as they are a PR firm and a lobbying organization and they directly employ Maria Cardona who also works as a CNN commentator. Prior to this she worked in the Clinton White House.

There is no information to suggest DSG is directly involved, but they represent the perfect nexus of corporate advocacy, biased news, political control and beltway insider culture. Facebook would be permitting Washington insiders working in the private sector to make political choices about what users can share with their own friends. This would be the end of net neutrality.

DSG is an extreme example, but both CNN and the Washington Post have been strongly connected to the Democratic Leadership Council's PR machine and it's attack on so-called fake news and subsequent attempts to link news unpopular with elites with some nebulous conspiracy of Russian propaganda and hackers in an attempt to gain the patriotic high ground while jump starting a new cold war.

Facebook appears to have been testing their product for a few weeks. I, along with other editors of alternative publications, posted certain articles, and used certain keywords in certain status updates to test the rate at which they were seen and commented on by our friends and followers. It is clear from our experiments that certain posts aggregated lower based on their political content and linked connections. This is the extent, so far, of our vest left wing media conspiracy. When we talk amongst ourselves, it is actually about data, experimentation and facts.

Facebook will be joined in censoring their user base by Google, Reddit and Twitter, each of whom's censorship efforts will be the subject of individual articles over the coming days.  The Mockingbird will be expanding it's social media outreach to additional platforms over the comming months.  Meanwhile Share this article if you like it and see how far it actually goes.