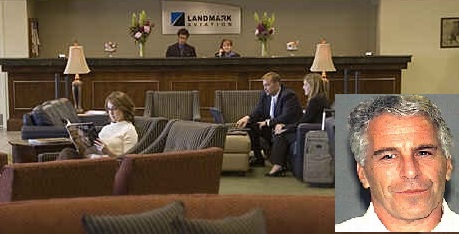 Throughout the ongoing Prince Andrew sex scandal there has been speculation as to the involvement of former President Bill Clinton. The tabloid press are happy to note the number of times he was on Jeffrey Epstein's private jet. They gleefully wonder how this will impact Hillary Clinton's latest presidential bid. The mainstream media dutifully reports Epstein's previous conviction for soliciting child prostitution, but do not give his whole history. That history is as intertwined with the intelligence community and organized crime as it is with the fashion world and royalty. Where it all meets is not on a private island, Palm Springs or London, but Columbus Ohio.

In 2003 The Columbus Free Press reported that Jeffrey Epstein had “recently loaned his jet to Bill Clinton.” The mainstream media did not trumpet this older connection between Clinton and Epstein when the latter was arrested in 2007 nor did it speculate loudly on it's possible impact on Hillary Clinton's 2008 presidential bid. Epstein's companion Ghislaine Maxwell, who is alleged to have procured pubescents for the prince, was also mentioned along with the death of her father, publisher Robert Maxwell. Multiple sources, including noted investigative journalist Seymour Hersh, allege that the elder Maxwell was a long time asset of Israeli intelligence.

The portrait painted of Epstein prior to his prosecution for pandering is peculiar. He made a fortune managing the money of Les Wexner. In 2009 Epstein's phone book was released on the internet. Bill Clinton's name is not in it. Wexner's name is there with individual listings for multiple residences and vehicles. There are also two separate phone numbers listed as “command center.”

Jeff Epstein's boss has a secret command center in the Columbus area. Epstein has an armored Mercedes with two phones or two armored Mercedes. His girlfriend's father is alleged to have smuggled weapons to Israel and now he and said girlfriend are accused of providing teenage sex slaves to a member of the British Royal Family. Why the tabloids have not linked all these publicly documented facts together might have something to do with their being owned by his friends. Epstein's phone book proves he has many friends in media and government. The Mockingbird will examine all 98 pages for more persons of interest in the coming weeks.

The 2003 Free Press article touched on Wexner providing money and PR support to build the case for the Iraq War. It was too early 2003 to conclusively say that there were no weapons of mass destruction in Iraq. In the lead up to the war a massive intelligence effort was tasked with providing evidence suggesting these programed existed to assist PR campaigns like the one Wexner was privately running.

While Epstein was managing Wexner's money it would have been hard for him not to notice that the latter's company was importing clothing from Hon Kong on an airline run by the CIA. Southern Air Transport has a long history of drug smuggling going back to Vietnam era. It's regularly scheduled flights from Hon Kong for The Limited were the cornerstone of the local development push to convert Rickenbacker Air Base to Rickenbacker Airport in the 1990s. Southern Air Transport also operated the C-123 Globemaster that was shot down in Nicaragua, an event which touched off the Iran-Contra revelations.

At the same time that Rickenbacker became a transport hub for cargo carried by CIA backed airline that was both known to smuggle drugs and involved in the Iran-Contra affair, Wexner's connections to organized crime were named in a Columbus Police intelligence report. A trucking company linked to the mob was also named in that report. That trucking company carried up thirty percent of The Limited's ground cargo. The CIA handled the air cargo, the mob handled the ground cargo and Epstein balanced the books. This peculiar set of business arrangements seem to shed light on the need for multiple armored Mercedes and phones that go to command centers.

Southern Air Transport ran into money trouble and it's route was taken over by Evergreen Aviation, which also had a history of connection to the CIA. Evergreen, despite it's own recent financial problems, still keeps one Boeing 747 in Columbus and still maintains regular service to Hon Kong. The only terminal that can serve that aircraft is owned by Landmark Aviation.

Landmark Aviation's core business is fixed base operations, or FBOs. An FBO is a sort of private air terminal, fueling and maintenance facility for charter, business and private aircraft. Some FBOs are very bare bones. Landmark's Columbus FBO is a posh facility with showers, conference rooms, a dedicated concierge and even its own Customs Inspection.

Landmark Aviation was alleged to have been the FBO of choice for the CIA's extraordinary rendition program, known as the “torture taxi.” Under that program, people were kidnapped, flown to black sites around the globe and tortured for months or years. European governments were aware of this program and some even issued arrest warrants for CIA officers involved.

Landmark Aviation cleaned up it's image somewhat since the revelations. It was sold and split with FBO operations being put into trusteeship. One of those trustees was former CIA director James Slesinger. It was later sold to the Bush family friendly Carlyle Group.

Landmark Aviation took over it's Columbus Customs facility from Lane Aviation less than a year after the latter opened it in partnership with former. Epstein's phone book listed Lane Aviation as the sole FBO in Columbus. It is not known if he still uses it, but Landmark's facility does have more posh amenities fit for billionaires, princes, presidents and spies.

The allegations being leveled against Epstein include trafficking minors for sex across international boundaries. The logistics of getting a minor across a border for such purposes would be much less complicated with the help of a Customs facility located in a friendly private facility operated by a company familiar with covert operations and making people disappear. Epstein is clearly no stranger to navigating that social space. Landmark even offers valet parking for the armored Mercedes.

Taking one step back to look beyond Florida and another step back to look into history and one views a different picture. It is of a billionaire and a spy's daughter providing minors for sex to very important people in a house full of cameras. That same billionaire has an armored Mercedes, a friend with a command center, business relations with multiple CIA backed airlines, connections to the mob, many friends in the media and was associated with the false PR that lead to the Iraq war. This should have more bearing on Hillary Clinton's election prospects than the recent location of her husband's cigars.