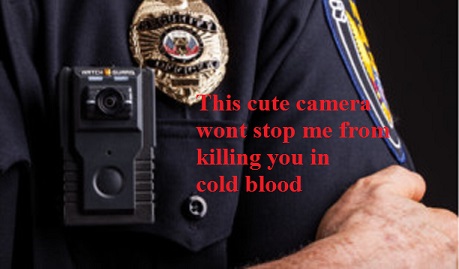 Officer Zach Rosen shot Henry Green dead in cold blood on his own street last year. He was not indicted and the city and county cared little, waiting as long as they could and refusing to meet with his family. This year Zach Rosen was seen on video running from out of frame to kick a suspect in the head while he was held down by another officer. He got no punishment whatsoever until the video went viral. Then he got a short with pay suspension. Then he got fired. His union is confident that he will get reinstated. No amount of witnesses, video, or dialogue keeps Columbus Police from brutalizing their way across the city day and night after day and night.

More video, more cameras and more money were the recommendations made by the police executive heavy presidential commission on 21st Century policing. Columbus Police Chief Jacobs participated in that process. Yet those same cameras are really just another method of 24 hour mass surveillance. The leading manufacturers of body cameras and license plate readers, like L-3 Communications, are tightly connected to contractors that make facial recognition software and built biometric databases for the FBI. L-3 Communications was also involved in the Abu-Gharrib scandal, where one of their employees was raping juvenile prisoners and was not fired, merely transferred to another prison in Iraq to rape some more.

This past Christmas eve, while sugar plumb fairies were dancing in your heads, the city council bought the police more presents as if they were the good children. The City ordered 1575 body cameras for it's officers at a cost of $3.6 million. Another $4.1 million will be for data storage. The cameras will be provided by Watchguard a company that touts it's “Christian Values.”

Watchguard will not be using facial recognition software from L-3 Communications, they make their own as part of their Watchguard Video REDACT product, which is integrated into the body camera package.

Thus the city is paying extra for cloud computing services that would have come with the body cameras had they been bought from Taser International, which hosts it's Evidence.com platform on the very same Amazon infrastructure.

The Amazon infrastructure that the City of Columbus is paying to rent was financed by an over $600 million contract with the CIA. The contract was such a sweetheart deal that IBM sued Amazon and the CIA in federal court over not getting it.

Not too long after Amazon got this huge deal to host all kinds of data for all kinds of people from the CIA, Edward Snowden appeared and began leaking. The leaks were initially covered by Glenn Greenwald in the Guardian.UK and the Washington Post. Shortly afterwords, Amazon founder Jeff Bezos purchased the Washington Post and coverage of Snowden ceased. This purchase, for close to the exact price paid by the CIA to Amazon for the cloud services once pension obligations were figured in, was negotiated by Allen and Company, a private equity firm managed by former CIA director George Tenet.

Returning from Washington and summing this all up, the Columbus City Council made a Christmas Eve sweetheart deal with a deeply religious company to purchase body cameras and facial recognition software from a company that hosts its recordings on a CIA platform at above market cost. They claim this will reduce citizen complaints when citizen complaints for police beatings and murder already go unanswered a the smallest protest is met with tear gas.

This is happening against a backdrop of the most brutal police chiefs in America recommending this be done nationally as part of a presidential commission that the Columbus Chief of Police participated in.

The conclusion can only be that citizen pressure, activism and literal boots on the ground are the only path to justice, and any so-called reforms are simply an excuse to extend the secret police state deeper into our lives. Thinking that government will ever hold police accountable or defend lives of citizens is magical thinking akin to believing in the tooth fairy.