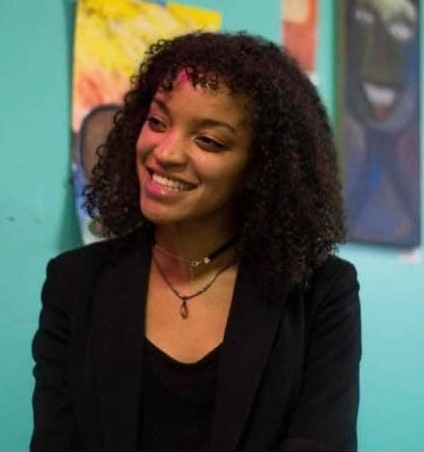 Here I am writing an obituary for Amber Evans, a person I wish I'd known better. I can call her a comrade and not be attempting to use her light to shine on myself. I did not know her as well as I would have liked to. If I called her a close comrade or a good friend, I'd be a liar.

That certain kind of liar that uses the spotlight of tragedy to shine something on themselves. I knew Amber from political work, and from the library. In both places she was pleasant, professional, knowledgeable, and genuine. Now she is gone, and we have never shared a not-working moment. She inspired a great many people in the struggle for justice, and two minutes around her would have left anyone without a doubt as to why.

She made goodness an actual integral and existential trait. This really showed. I can not say she was my good friend, but I wish she had been, and now some cruel fate has robbed me of any future to forge that friendship and her of her life.

He family has expressed deep grief and asked the public discussion be kept to a minimum. This is hard for me. As an investigative reporter, my job is to ask the hard questions, to tug at the strands of facts that are woven into every tapestry of lies until the greater whole unravels into the pile of polyester from which is was made.

The facts of her reported passing do not make sense. The official search by the government was in my professional opinion complete garbage. I have not advertised that I have an opinion that qualifies as professional until the time of this writing. I have military grade search and rescue training and experience and I have been an instructor to others in those and related skills. Her body should have been found in a matter of hours, not months. The excuses given by the police for not searching river sooner are so weak they are not worthy of the term feeble.

At the barest of bare minimums, to the City of Columbus her life did not matter. Speculation as to why and how her life ended is not appropriate here, but the tools, the facts, that move speculation to investigation have been discarded by sloth and neglect. Amber's central activism was around that concept that life matters, that black lives matter. The failure to even look for her by the state is a direct slap to her as a person and to everything she stood for as a great person.

It is the tradition of Black Liberation Activists to remember their fallen with the words “Rest in Power”. This phrase says in itself there can not be peace until there is the power of full equality. In the political tradition of which I am a part, that of anti-fascism, we use the word “PRESENTE!”. We do this to connote that though they are fallen they are still with us, and we honor them as though they are in the room.

Amber's close comrades are in grief. Having lost close comrades to murder many times, I feel for them. I know that need to have one who is lost to the earth still present in your thoughts, and still bearing on your plans. What would they have said and done in the situation you find yourself in? We walk amongst the living and we move forward, but we do not do so alone. Those who are still present connect us to the why of what we do, and their memory whispers our focus. Our history is not dead, nor is it gone, it is with us, for our dead are present. They move us to our future.