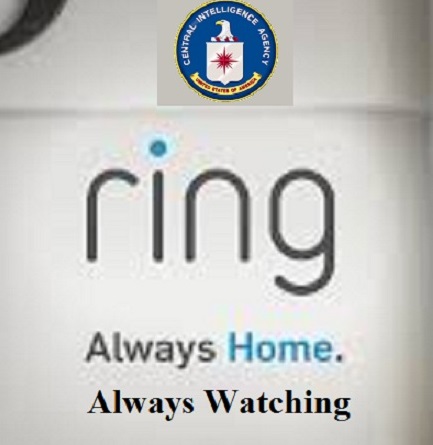 “Amazon Ring” is owned by and branded as Amazon but the company had a life of it's own before it's acquisition and re-branding. It has been a local law enforcement favorite. It's partnership with Amazon puts all it's data in the Amazon cloud which was funded with the same money that Jeff Bezos went on to buy the Washington Post with. It provides users with a “Ring Neighbors” app that allows them to gossip about the brown people they see near their white picket fences. What happens with the data flow? The short answer is anything the police and intelligence services want to happen.

Here in Columbus it is being aggressively pushed by the Columbus Division of Police, who never miss a chance to shoot an unarmed teenager. It's nearest competitor, the previous leader in neighborhood based snitchware packages NextDoor, is favored by the Franklin County Sheriff's Department. The Columbus Division of Police was one of over 400 police departments who were identified as being in partnership with Amazon to use a special police “Ring Portal” to the Amazon Cloud by a Washington Post fluff article that amounted to free advertising in a giant ring of self-interest around Jeff Bezos's finger.

All data uploaded to the Amazon Cloud by Ring doorbells and home interior cameras is a business record and thus is subject to seizure without warrant or notice by federal government law enforcement and intelligence agencies under Section 215(a) of the Patriot Act. Police also have a handy map of everyone who owns the product so they can identify which suburban busybodies have footage of who dared sully their streets with foot traffic.

Police Departments will give a homeowner Ring for free if they consent to give the police on demand access. Police can “request” footage from a homeowner if they are one of the ones who purchased the device rather than have the police install a camera on their house in order to watch their neighborhood for free. This request comes as an automated message about the police needing footage to investigate an unspecified “incident” near them. It is generated when an officer clicks on their house on the handy Google generated and Amazon provided map.

Responding to the request gives the police access to all the footage from that camera or multiple cameras if they are installed in the building interior. Thus if you decided to have sex with your partner in the comfort of your own home and forgot to cover the police eyeball in the corner the cops could watch you over and over and over again while “investigating” reports of a “suspicious person” blocks away if you are not careful where you click.

Police also have free access to your discussions of suspicious person on the “Ring Neighbors” app. Rather than an implicit tool of social monitoring and control by law enforcement, this is an explicit tool that gives police more access to your conversations with your neighbors than Facebook gives you to the posts of your friends. As a by product of consumption and as a security device to protect your convenient deliveries from Amazon, law enforcement now monitors your interactions with your neighbors and who comes and goes to from and past your home.

It is unclear who is partnering with Ring to provide facial recognition capabilities to Ring's software package of panoptical paranoia. What is clear is that Ring intends to do so. The obvious choice is Amazon's existing facial recognition package, which is called Rekognition and is already available to developers through Amazon Web Services and thus already integrated into the CIA financed Amazon cloud. For third party vendors help police identify everyone who comes to your home for diner the leading candidate is Safran (formerly L-1 Identity Solutions), already used by police in India in conjunction with CCTV systems and in America by leading manufacturers of police body cameras that seem to always be off when a child needs die in a hail of bullets.

Ring, NextDoor and Google's competing “smart home” product Nest are part of growing and increasingly seamless global surveillance apparatus directed at the public. It forms another conduit for data to reach the local tentacles of a police apparatus that is increasingly ubiquitous in its level of militarization. It is an intrusive layer between the surveillance of sex toys, surveillance of the internet, and surveillance of national borders. On the local level it does what streetlight mounted microphones and always on except when convenient police body cameras can not, which is be in your yard and your home.