Both side of the so-called political aisle have provably suppressed voters. The Mockingbird caught the Democratic National Committee suppressing the election turnout in Rhodes Island during the primary, and a key Democratic operative is was murdered in DC just as a voting rights lawsuit in which he was a potential key witness was filed. On the Republican side of aisle, Herr Trump ended his final debate by refusing to accept any outcome other than victory for himself claiming the election is “rigged.” As he flapped his gums and shook his wig, his running mate Indiana Governor Mike Pence has sent State Police to raid Democratic party aligned voter registration centers that were attempting to register African American voters. Indiana joins Ohio and North Carolina in voter suppression as both sides jockey to game the system and lend legitimacy to the two least loved presidential candidates in American history.

The Mockingbird previously reported on how partisan contractors illegally removed 1.2 million people, including this reporter, from Ohio's voting rolls, but Pence's police have added a new dimension to the Midwest mayhem. Combined with the false flag firebombing of a Republican County headquarters in Hillsboro North Carolina to cover voter suppression efforts there and a pattern that could be a suppressive swing state sweep emerges.

On October 4th, Indiana State Police raided two offices of the progressive voter registration group Patriot Majority USA. The raids were prompted by a Hendricks County election official finding 10 voter registration applications that were irregular. The irregularities consisted of phone numbers with the digits transposed and zip codes being corrected. Patriot Majority's President Craig Varoga terms these irregularities “mistakes.” None of the 10 applications were actually false and a phone number is not required to vote.

Hendricks County election board officials reported these clerical errors to a single State Trooper who is himself a Republican candidate for Sheriff in that county. His “exploratory committee” mushroomed into a raid in which State Police seized computers, cellphones and records. Employees of the project were taken out of the office, at least one African American employee was held in handcuffs for the duration of the search, and all were denied access to attorneys repeatedly during extensive questioning. The raid led to the expansion of this “investigation” into 9 and then 47 Indiana counties and 45,000 voter registrations were seized.

The bulk of the registrations were of African American voters as that community is where Patriot Majority USA was focusing it's efforts. These voters will have their applications put on hold and be forced to vote on a provisional ballot. Provisional ballots are second class ballots that are counted days after the election if candidates do not concede. Estimates using 2010 census information conclude that 13% of the Indiana's African American population was disenfranchised by a single raid made by police answerable directly to Vice-Presidential candidate Mike Pence.

In North Carolina on October 15th the Orange County Republican Party Headquarters in Hillsboro was firebombed with a simple molotov cocktail. This was immediately called an attack on democracy and there were great outpourings of sympathy, including from the local Democratic Party who used crowd funding to raise over $40,000 for their so-called rivals in just 2 days. Despite the fact that buildings are insured against fire, and Republicans are never lack for cash, the real crime was hidden by this bi-partisan unity. The office illegally contained an unknown number of absentee ballots, which is illegal under North Carolina law as it is in almost every state.

The press reported the destruction of the absentee ballots and then back tracked this reporting as a mistake after further consultation with Republican spokeswoman Emily Weeks. Weeks first denied the ballots were destroyed, then corrected NBC again claimed they never existed. Archived copy of the initial news shows the unamended claims. Weeks has not commented on why she claimed her party had ballots that is was illegal to possess and then denied having them. See below: 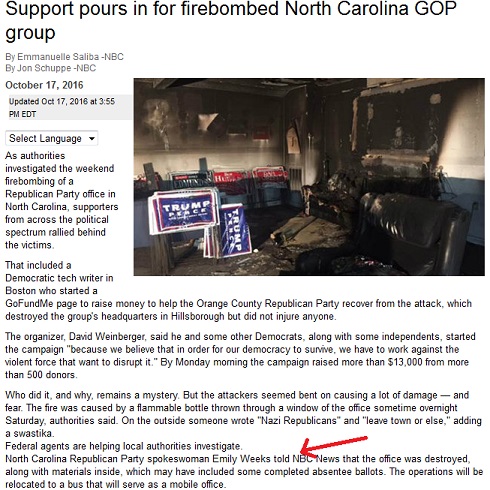 No physical proof exists either way as the now non-existent ballots were destroyed in a mystery fire. There was also graffiti on the site calling the party “Nazi Republicans” and included a swastika which seems overblown. Persons opposed to fascism rarely use a swastika as a symbol. The whole incident smacks of a false flag operation to disappear a large number of ballots. Persons who request an absentee ballot can not vote on election day. Thus the Republican party erased thousands of votes and the Democrats paid them for it on top of their insurance claims.

Taken together the dirty tricks in Rhodes Island, Ohio, Indiana and North Carolina make this election a complete mockery of democracy as people are denied the expression of their political desires by elites with badges, guns, computers and firebombs in an effort to game a system increasing in it's total lack of transparency.