Could getting public records be harder? I’d had trouble with public record request (PRRs) before. At first it was some documents missing. An audiofile not in place. Then it was a few missed requests, some nudges need. My requests started slipping through larger cracks. I’d be first in and last addressed. Sometimes requiring repeated follow ups. Sometimes with promises of documents once an investigation that closed that didn’t come. I was a little annoyed at times, but assumed the best of intentions from busy departments.A pretty rapid decline started in an email exchange with village clerk, Judy Kintner, on January 14th, 2017. The exchange started with Kintner rejecting feedback I’d given on the handling of a different public records request (PRR). She responded by asserting a public records process that seemed contradictory to fact. Had I been misunderstanding the process all along? I requested public records so I could pin down village government’s actual process. The resulting back and forth ended with the village tossing the solicitor in the mix, who effectively put a legal wall between me, my government, and getting answers.

There were so many things in that string of emails that would repeat over and over the next year and a half.

As a cherry on top, reviewing the threads more carefully, I could see it was possible village staff had buried my request on New Year’s in favor of others, while pretending the departed chief had made a mistake.

The whole thing was a game of whack-a-mole. It was frustrating and seemed designed to cover the fact that Kintner had used a made up, ‘inviolable’, internal public records process triggerred by feedback I’d provided on the handling of a previous request.  Conard effectively shut down my attempts to get the PRR completely fulfilled by categorizing my inquiries as legal questions that he couldn’t answer, being the village’s council, and village employee’s couldn’t answer as my inquiries were legal questions. Sit with that. You ask about how things work and the village sets up a dead end catch 22 in which they don’t have to answer.

His final word was a brazen, cloaked dare to sue them as provided by the law if I didn’t like his response. Push a weak target, we all fall down.

The whack-a-mole must have been so effective it became a regular dance.

When I would ask for a PRR, pieces or all, it might be ignored in favor of explaining a process, even if I specifically noted I wasn’t asking for that. When I would ask for an explanation of process, Ohio's public records law would be quoted that they weren’t under any legal obligation to explain their processes, even if I specifically noted I wasn’t invoking the records law. When I became too burdensome, Conard would step in. If still I persisted, they would say they didn’t have to respond any more and go quiet.At one point it started to cross over to violations of the Ohio Public records law. I quoted it so many times that I couldn’t figure out why they kept communicating as if they weren’t bound by it. The records clerk, and the solicitor, if advising, should know, understand, and follow liberally and in good faith a pretty simple law. It’s not malleable based on fiefdom. It became common for me to highlight, underline, bold, breakdown, try short emails, try long emails, ask questions, quote PRR law, or make things explicitly, precisely clear to an absurd level. I put myself though contortions because I believed if we could just understand each other, we could resolve this.

When your sucess depends on mutually agreeing a rock is a rock and a tree is a tree, if one party insists on the reverse, you have two choices. Assume they are playing games to stall progress/cover facts and respond accordingly, or keep trying and trying and trying to come to a consensus that a rock is indeed a rock. I was repeatedly wound into a painful pretzel because I chose to believe they were operating in good faith.Like the first exchange, some records later threads indicated that the clerk didn’t see my request as equal to others, fulfilling theirs first, then holding them back from me until getting legal advice. It confirmed some of my thoughts about why I might continue to be shafted. 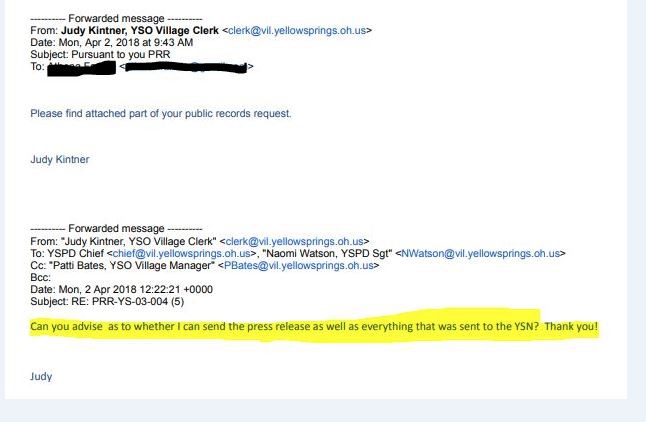 The “overly broad’ and ‘too vague to identify the records’ exemption was repeated like a panacea to all ills public record.

One of my most recent PRR’s is simply 1) leave requests, 2) actual leave taken, and 3) leave schedules. I set a time period. I identified officers.

This request was addressed similarly to any others I’ve put in since 2017.

I was given records that didn’t fulfill number 2, and none for 1 and 3. I followed up. When I pushed the issue, I was told to wait a week for the right person. The resulting offering was so barrier filled it could keep out a zombie army. Excessive non-responsive records, incorrect records, refusal to explain record storage, refusal to fulfill sample PRR’s (still legal PRR’s), and monetary/physical barriers despite an ADA request/attempts to work with reducing those barriers.I don’t know why I keep believing that if I trust, it might be different this time.

After trying to pull teeth out of an alligator, Kintner predictably shut it down. Her final response? 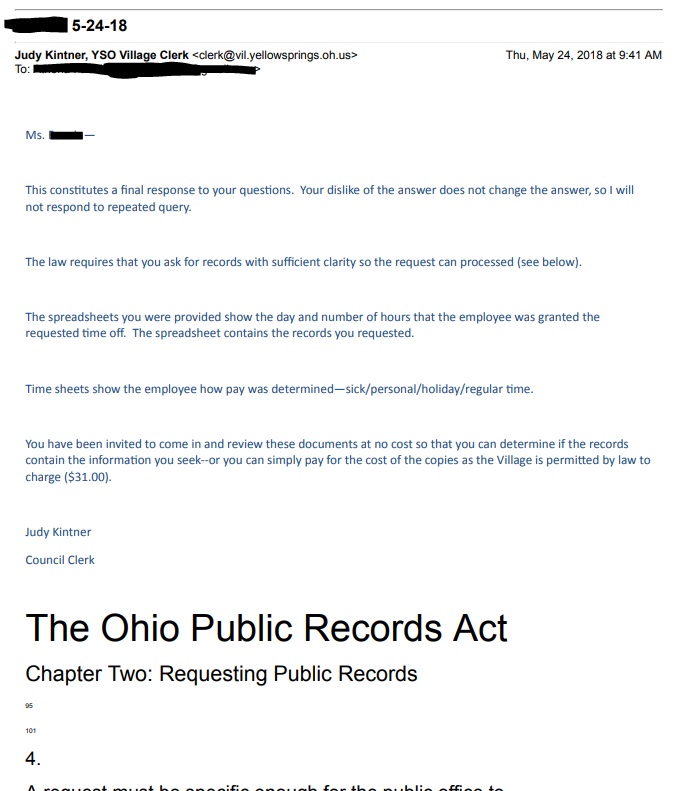 Rubbing salt in the final wounds, she justified her PRR denial of a pretty clear and specific request with the “overly broad and ambigous’ escape hatch.

Request the exchange with the attachments yourself. You’ll see my request is not vague or overly broad. That I asked questions, quoted the law, highlighted, bolded, asked for samples, tried to break things up, break things down, understand, asked for another PRR as a sample. You’ll see she quoted a manual instead of the law. Reading it, you might see a wee bit of gaslighting.

Her email for PRRs is clerk@vil.yellowsprings.oh.us. Have at it.

Its ‘courtesy’, not a rightAbove and beyond PRR fulfillment, there is an uncodified,  expected right for all of us to know how our government operates.Over the past year and a half, I’ve begun to hate the phrase “provided as a courtesy”. It’s been used to both ignore my requests and put me in my place - powerless without their goodwill. Which they revoke often.

I think the first time I heard it was in the January 14th 2017 emails, from both Kintner and Conard. The last time was maybe April. 2018, where Kintner advised Village Manager Patti Bates on the topic of courtesy. 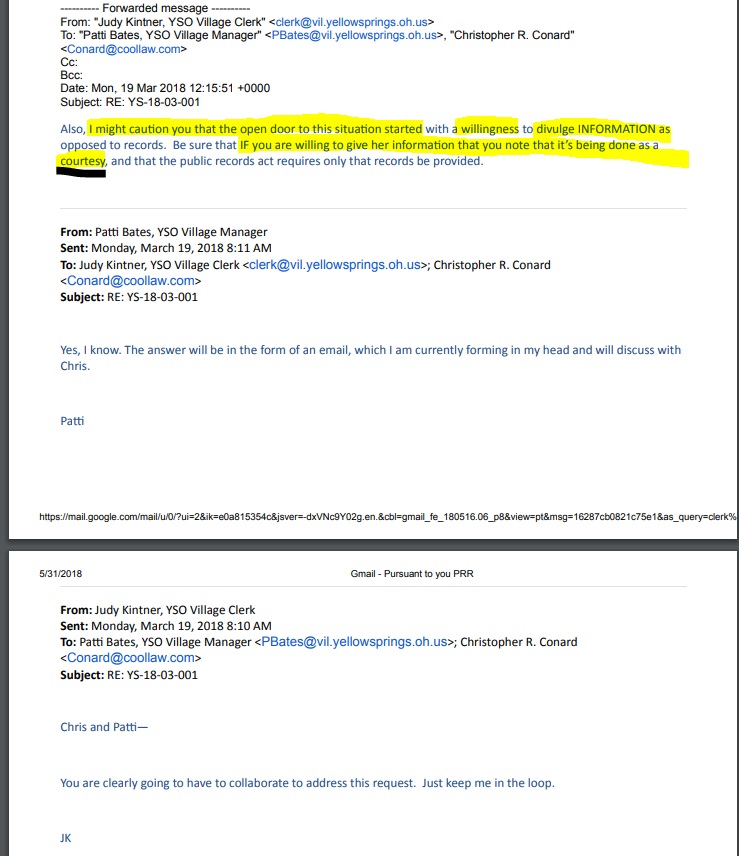 Read that phrasing again. “Caution you”  “Willingness”, “divulge” “IF you are willing to give her information”. Village staff seem to believe that it is appropriate and within their purview to make its workings secret.I should note, Bates astutely did not tell me in that response that she was providing anything as a courtesy, nor implied it could be revoked. I’ll give her credit for reading the disclaimers I’d started to add to PRRs. Or the complaints I made in council meetings. Or perhaps, the Bates realized what a seriously problematic approach that is to government. Which probably needs communicated to the clerk and solicitor. Most likely, I would think, its because my query was a public records request, not a request for process, and thats exactly what Bates addressed.

Required by any law or not, it should be without question that local governments have a duty - an obligation - to tell people how they work. And if village staff can’t be ethical on that front, hiding information behind a veneer of authority, then village council should pass an ordinance legally requiring staff to tell the people internal processes.

Not even the end

This was supposed to be 600-800 words. At 1100+ words I can’t even begin to describe how poorly I’ve been treated. How difficult requests have been made. How much gaslighting has been going on. How many unnecessary battles were created. This doesn’t cover transparency in the school district. It doesn’t cover the struggle others have had.

Between the first and last PRR I described, its been one year and a half long wrestling match, for which I was poorly equipped. I was often reduced to begging for straight forward answers. I wanted to not be spun in circles, to not be told requirements - codifed or otherwise - were actually courtesies, to yes have the public records law be referencef, accurately, and please, please, please, followed. nformation sunshine is an absolute requirement for government at any level. My experiences made me wonder

I still have records requests unfilled, unnaddressed, or rejected for non-existant or suspect reasonings. Its hard to get them to answer which parts were rejected by a legitimate authority, as required by the PRR law or because they don’t exist. Its hard to get them to cite the  legitimate, which is also required. And for the love of anything, don’t ask them how a record is stored if you’re trying to figure out how to request what you are looking for. Or maybe do. You might have more success than me. Me? I guess I’ll keep contorting to get records rightfully labelled public.

Whether you like him or not, in his article on the topic Gerry Bello’s word ‘abuse’ is spot on. Abuse of me. Abuse of you. Abuse of records. Abuse by and of the village.