There is a legal tactic called SLAPP. SLAPP means Strategic Lawsuit Against Public Participation. It is a tactic used mostly by large corporations to intimidate political groups and the public at large from opposing some injustice. On April 26th the Yellow Springs School Board stooped to this new low by bringing suit “in excess of $25,000” against a former teacher for an anonymous reply to an article by this publication on Facebook they allege that she made. The suit, based on very flimsy evidence is part of a pattern of apparent intimidation on the part of the board in an effort to silence critics.

The suit, brought against former teacher Angela Bussey, was filed the day after Principal Tim Krier's medical leave was extended. April 25-26th was a busy time for the leadership of the school system. Mario Basora confronted Matt Raska, a reporter for this publication, at the gym about his public records requests. The very next day, as a lawsuit was being filed against a former teacher, an “optional work day” for board members was held to carry out some kind of undefined work. Perhaps this was a strategy session or collaboration on a broader enemies list.

The suit brought by the board alleges that an anonymous posting on Facebook broke a settlement agreement they had reached with Bussey in order to remove their legal liability for a pattern of bullying that Krier was allegedly engaged in. Bussey's union had brought multiple legal challenges against the school system on her behalf during her brief tenure there. The Mockingbird became aware of both legal actions through extensive court and public record searches.

Prior to Bussey being served, the Mockingbird had already obtained her personnel file along with others from the school system. Upon examining the settlement agreement which the Board's attorney submitted as “evidence” against Bussey, it was found that the Board itself had broken the agreement almost the moment it was signed. The board agreed to remove negative references from Bussey's personnel file, yet these remained in the file. The file was later actually published in full by the Mockingbird as a reference for a previous article. Said file also contains the very same accusations that the board claims Bussey anonymously made.

These accusations, made in sworn court documents released to this publication by the very organization they were made against, paint a picture of a work environment ruled by fear where men dominate women and asserting ones basic humanity will be met with retaliation backed by the full force Superintendent Mario Basora and his captive board. Leadership is weaponized for use against the employees and the public, and the behaviors Mrs Bussey alleged in her suits and civil rights complaints mirror Basora's online demeanor of blocking dissenting voices and jabs at this publication's “anti-leadership narrative.”

It is clear that other teachers and even the Assistant Principal were well aware of Krier's apparent sexist targeting of any woman employee he thought might have a spine. According to Assistant Principal Hatert's statements recorded in a civil rights complaint Krier “would step on his best friend to advance in any way. He is bullying you and I don't know why, but he's really got it out for you. If you don't do what he says, he will slam you in the end.” Another teacher said the Krier “gets rid of people, especially women” 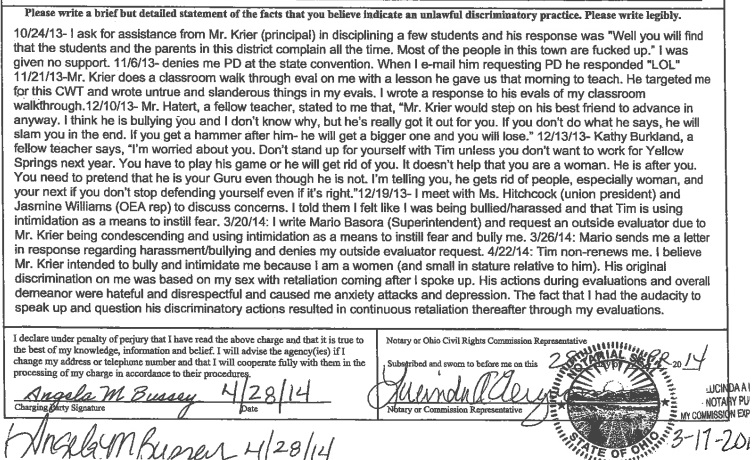 Krier apparently shared his disdain for women teachers with his son Noah Krier. The younger Krier had charges of gross sexual imposition recommended against him and is the center of another seemingly botched sexual assault investigation. Documents from Bussey's initial case show that Noah Krier had bragged to his friends at school that his father would make sure that a certain teacher would never get a job again.

These threats of retaliation have been carried out against at least one teacher and apparently against anyone who speaks up. Krier's lack of involvement in the day to day operations of the school have not stopped the Board from spending taxpayer money to muzzle their opponents.

This lawsuit, which appears to be without merit or even evidence has been brought at a time when the school is seeking a massive tax increase and multiple online threats have been made against levy opponents and citizens seeking answers about a pattern of sexual abuse of school children. More provable effort and money have been spent on a pair of anonymous facebook posts than on a pair of sexual assaults.

This pattern might cause citizens to question the priorities of the Board and the motives of their ardent supporters.