At least 21 people were arrested after tear gas or some other noxious chemical was deployed on the protestors from a crop duster aircraft. 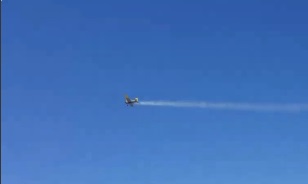 Live stream video (reposted below) showed police equiped with shotguns and armored vehicles both blocking in protestors and demanding they leave. At least one vehicle equiped with a sniper station and one Bearcat armored vehicle can be seen in what photos and videos have escaped censorship.

The video was shot as additional protestors attempted to respond to the arrests of at least 21 other people. If additional photos or video become availible they will be posted.

There have been multiple reports of police blocking access to facebook accounts to keep live video from getting out. Because of the level of militarization and danger to citizen reporters on the ground, the Mockingbird has elected to go to press early with this breaking story. As further updates become available they will be posted.