It was billed nationally as a “March against far left violence.” It was an attempt to distance activity from last weekend's “Unite the Right 2” rallies in Charlottesville Virginia and Washington and likely also a way to cozy up to a recent congressional initiative to outright suppress anti-fascist protestors. It drew small handfuls of assorted right wing activists to Boston, Spokane, and San Jose. There were more serious mobilization efforts that drew over 100 armed fascists to Seattle and over two dozen to Austin Texas. Despite pre-rally interference and negative publicity that seem to have reduced participation, the events marked nine fascist mobilizations in in America the eight days between August 11th and August 18th.

Some of the participants who might have otherwise showed for these events may have decided not to after an online operation by an unknown anti-fascist group. The group joined the organizing behind the scenes and began selling t-shirts for the event. They then released the names and addresses of all the people who had ordered shirts but not yet paid. This caused backlash against the rally organizers who inadvertantly helped promote the sales.

The two most significant events, Seattle and Austin, drew national attention. They were slightly different from each other in that the Seattle event sourced from the so-called 3% militia and the Austin event was directly sponsored by elected Republican officials. The police in both cases made a huge show of force but this time made token harassment arrests at the end of the rally seemingly to not have a zero in that column on the balance sheet.

The Seattle militia event had a white supremacist backbone despite claims to the contrary. The Guardian failed to note the white power hand signs made in a group photo they published. See the photo below: 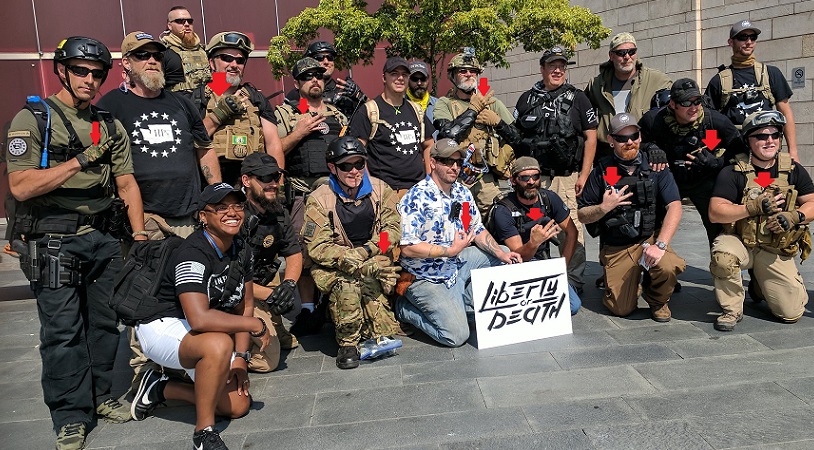 The red arrows point out those making a version of the old “OK” hand sign, which they will undoubtedly claim means 3% because of the three fingers outstretched. It actually stands for “white power” with the three fingers forming a w and the circled thumb and forefinger coming together with the wrist to form the letter P. Although a person of color can be seen in the photo above, it is standard 3% militia practice to recruit token non-white members purely for photo-ops. This publication has seen it done here in Ohio. In the photo below, one can see members of the Proud Boys, which has participated in numerous white nationalist events, making the same sign. Known Proud Boys were sighted and pointed out at both the Seattle and Austin events by anti-fascist activists. 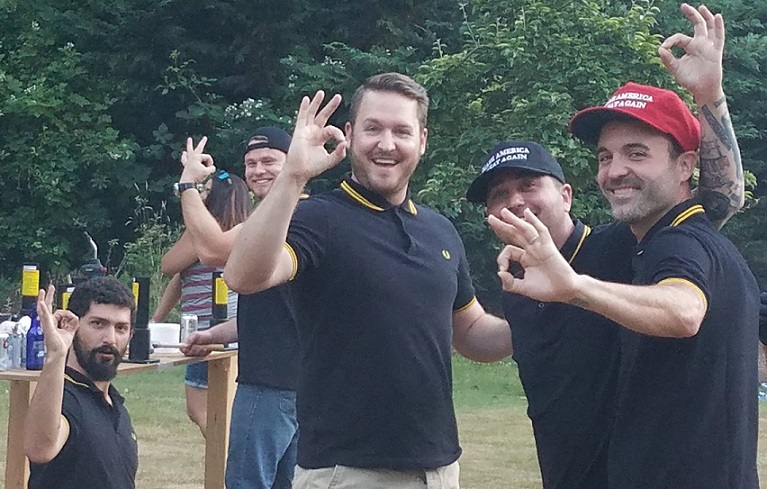 In sharp contrast to the recent brutal unprovoked attacks by police on antifascists in Portland and elsewhere, the single actually injured fascist in Seattle received prompt first aid from the police. The man claimed he was hit by a thrown object, but no photo of the object, thrower, or report of police arresting or attempting to arrest an object throwing person have been found. He may have slipped or the relatively minor injury could have been self inflicted for attention. 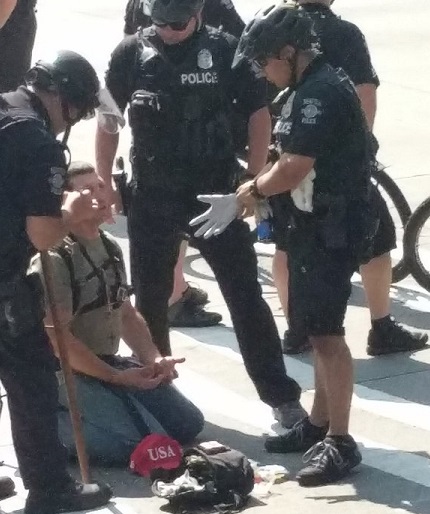 Meanwhile, several fascists, claiming to be press, tried to elbow their way into the anti-fascist crowd and start fights on camera. The woman pictured below can be seen holding a camera in one hand and can of mace in the other demanding interviews in order to target people for violence later. She was eventual sent packing after spraying a couple of people. Protestors named her #pepperspraypaula and would like to meet her again. 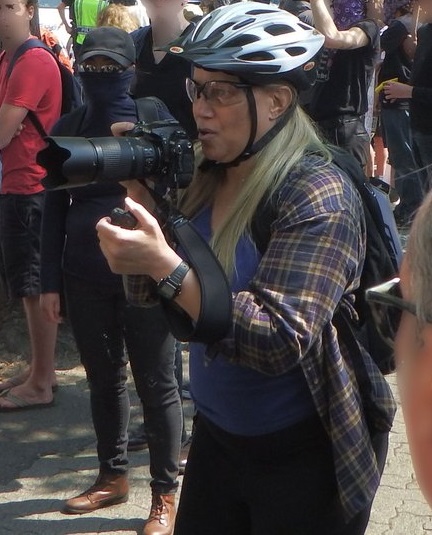 Meanwhile there was a second large event in Texas. The Capitol building of Texas and the grounds surrounding it require sponsorship by a sitting member of the Texas legislature in order to get a permit and protection from the Department of Public Safety. Representative Dan Flynn, a rancher, banker and newspaper publisher from Van in East Central Texas. Although his office staff denied knowing anything about white supremacists advertising for the rally and showing up, it's clear that Dan Flynn hates Mexicans.

Flynn introduce legislation that would make Texas English only in 2008. He, along with his chief of staff, are also members of the Texas State Guard. The State Guard is a military organization that thinks it is still the national army of Texas. It answers directly to the Governor but can not be federalized like the actual Texas National Guard. It mostly performs disaster relief when not patrolling the southern border hunting Mexicans. Playing soldier in the army of Texas is Flynn's hobby when not banking or making laws, but he had no idea actual Nazis would be interested in attending his franchise of a national “March Against Left-Wing Violence.” Or so he said to the Texas Observer, which was the only news outlet that bothered to pull the permit, make the phone calls and print a response.

The Texas DPS never seems to skimp on extra riot police in the experience of this reporter. Texas State Guard Troops, although mostly classified as military police, were not seen. Apparently the Governor did not loan his private army out to the fascists on the capitol steps in a direct fashion.

Although there was only one reported arrest, and that came after the rally on City of Austin rather than State property and thus was performed by Austin police, the defense of the 31 fascists that did show was predictably heavy handed as is the case for this type of event.

These smaller marches round out a solid month of national white nationalist organizing and mobilization. Although the turnout at all the events was smaller than expected, this trend reflects a strategic shift from larger national events to small and medium regional and local events in greater numbers. The Mockingbird will continue to cover fascist organizing and most importantly people's resistance to it as it develops.