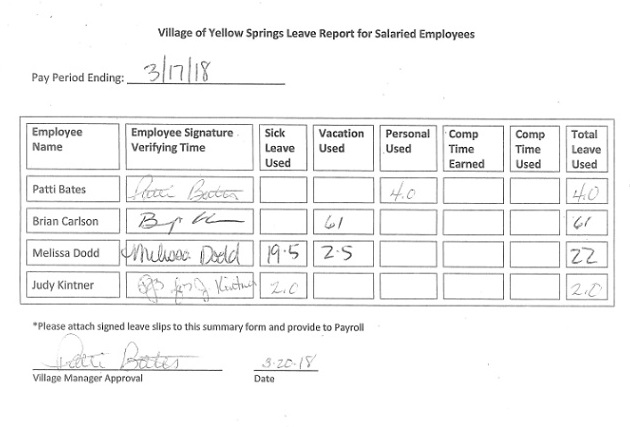 Our recent lawsuit over public records ended in mediation, allow us to finally get records from the set of three secret Iphones that YSPD had been keeping off the books. These are department issued phones whose existence was ignored when records requests mentioned them by name and model until the it became an issue of court mediation. Chief Carlson was issued a phone in January and both Sgts Watson and Knapp, according to records, had theirs activated on April 25th.

We requested all the phone calls and logs to both Dispatch and all Department phones from March 6th 2018 through March 9th. The Village apparently destroys actual call content after 30 days, according to their records retention policy, which is an uncommonly short amount of time. Apparently the servers installed by Sgt Josh Knapp's other employer, Tech Advisers don’t have the memory capacity to store more. A $25 terabyte drive could hold 67 days of continuous phone conversations uncompressed. Dispatch is not on the phone literally every minute of a 24 day. Yellow Springs does not have a $25 terabyte drive for this purpose. But it does have three $725 secret phones with Verizon calling plans.

It seems that this $725 no longer secret phone the Village so kindly bought the chief is entirely for his personal use. We requested, and after instructing the village solicitor on how to navigate Verizon's records system acquired the logs of Carlson's phone for March 6th through March 9th. Show below is the print out we were provided. 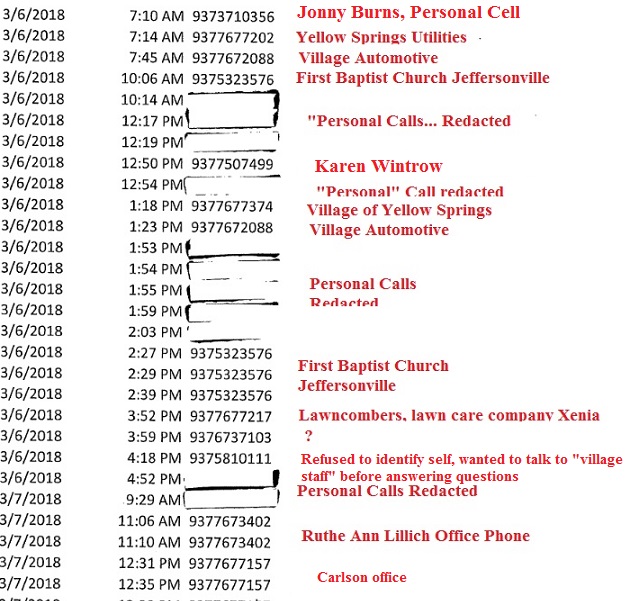 The phone calls that were redacted were done some because they were “personal.” we have no idea if that is true, we know only what we are told. With that out of the way, ran every non-redacted phone number and got quite a few calls that seem to be not related to the business of policing. These include calls to a mechanic, a diner in Xenia, a Baptist Church in Jeffersonville, Honda's leasing agency, and a lawn care company in Xenia amongst others.

All these not-personal yet seemingly personal calls were made from a secret department phone while the chief was supposedly out of town on vacation and an investigation was ongoing into a serious sex crime involving children.

We can assume that the chief does in fact own his own phone considering his salaried position. There are government programs for parents like himself that need a phone but can not afford one just so they are able to dial 911 (or well..I guess he would just call himself) if there was an emergency. Thus these calls to order lunch, adjust a lease, and fix his car could have been made from his own phone. But vacation time during a crisis does seem to come with some perks.

Regardless of all other factors, only five phone calls to three numbers, including two to Ruthe Ann Lillich, could possibly be construed as police related. One was to Jonny Burns and two were to his own office. Since they were seven minutes apart, he wasn’t checking his voice mail. Who was at the chief's desk? The phone call to former councilwoman Karen Wintrow must have been personal as she has no official village duties.

This is what is happening with village time, tax dollars and trust. When the next set of records is requested, it is hoped that we will not have to go through a two month court process to get them and instead have a deeper look at the functioning or lack thereof in Village Government.