The small town of Yellow Springs has seen much community outcry since the revelations last week that the school system allowed an alleged student rapist to remain in the schools for most of a year and that said student was the Principal's son. Many parents and other residents have openly called for answers from the school board and none has been forthcoming. The reason for the silence is simple. The entire board is under a gag order masquerading as board bylaws.

This document, which they are all required to sign if they want to take their seats on the board, reads like an employee handbook. In actuality it has no basis in State law and functions in such a way to make the board subservient to the school superintendent. This is what permits coverups as well as illegal lobbying for an upcoming school levy. Excerpts from the two page document as well as the lobbying materials will be included in this article. It is also posted at the bottom for download.

As noted above, only positive feedback is to be given to the superintendent or treasurer. They are also required at all times to be cheerleaders.

The Chain of Command and "Micromanagement"

The Yellow Springs School System is not a democracy or subject to democratic control by elected officials. The Principal and the Superintendent are the only people with any power. If a parent were to approach a board member with a problem that could not be resolved, that board member is required to refer the problem back down the chain of command to the “Administration.” In the case of sexual assault by the Principal's son, board policy requires school board members to refer the problem to the Principal or Superintendent. Observe: 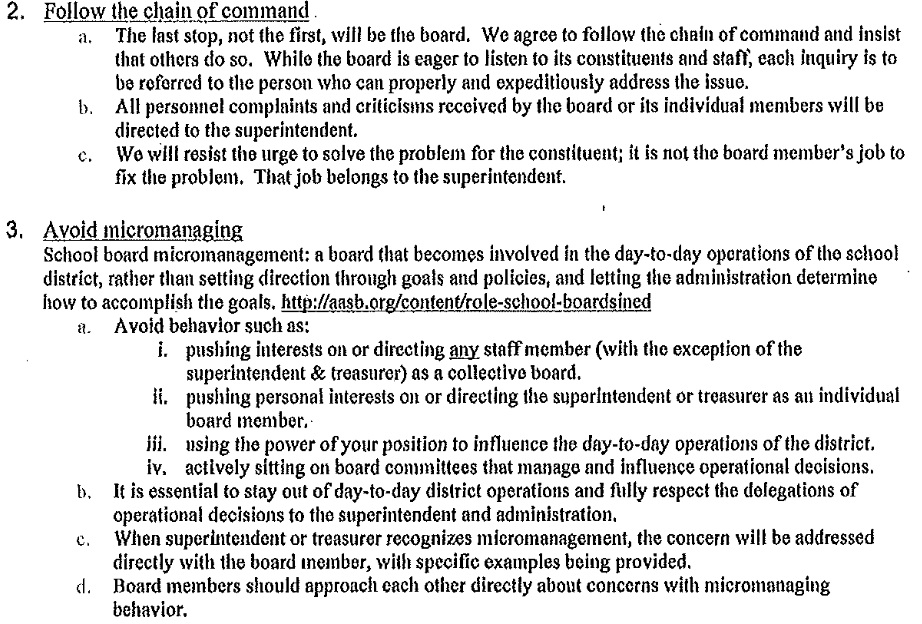 The inability to stop illegal activity

The board has no authority over anything written, and therefore could not have had a say in the illegal lobbying that took place when the recent School Newsletter was mailed to parents. As seen below the address is of the School Board not the levy committee or it's treasurer. Ohio law prohibits any political subdivision, which includes a school district, from using public funds to “publish, distribute, or otherwise communicate information that supports or opposes the nomination or election of a candidate for public office, the investigation, prosecution, or recall of a public official, or the passage of a levy or bond issue.” Either the entire School Board just broke the law, or they were unable to individually keep the administration and superintendent from doing so.

The document below clearly claims urgent need and directs parents to a website designed to encourage them to vote. It cites an outside contractor's study in favor of the levy. This is clearly in violation of state law. It is spending tax dollars to raise taxes, what engineers refer to as a self licking ice cream cone. The document was sent by an anonymous source and has been altered to remove the source's kitchen table from the photo. They fear retaliation.

In the end, they are party to the crime if they do not address it either through complaint (to the Greene County Board of Elections, Secretary of State's office or the Ohio Ethics Commission) or direct discipline of the parties involved. If the parties involved are not the administration or the Superintendent, they have no direct power as this would fall under the micromanagement clause of their illegal contract. They are legally bound to be silent about illegal activity through an illegal contract. This is the very definition of a rubber stamp legislative process and a captive board. 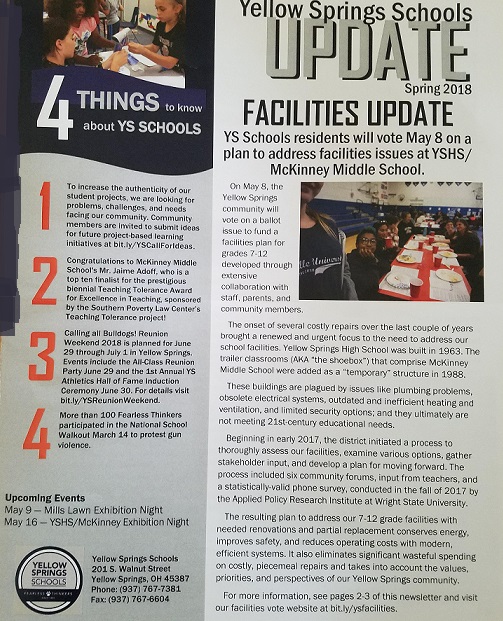 The residents of Yellow Springs have no recourse to their own elected officials when it comes to protecting their children at school from sexual assault. The same mechanisms that shut them out of any say are also used to illegally demand more of their tax money despite the appearance of a democratic process free from undue influence.