There is a certain joy in a newsroom when an accurate prediction of the future comes to pass. Two days ago the Mockingbird published an examination of secret untested cellphone app that would be used to tally yesterday's Iowa caucus vote. Yesterday we reported on Mayo Pete Buttigieg's collusion with CNN and the DNC to block publication of the vaunted Des Moines Register Poll, once considered the gold standard of prediction in the first primary contest in a presidential election. Today those two lines intersected in a caucus hangover like the kind that is produced by bad margaritas at a faux Mexican restaurant franchise followed by a worse omelet served in a dirty ashtray at 4 am. Nobody knows who won, Buttigieg is claiming the least probable come from behind victory in history, and democracy is the only looser.

In the last 12 hours, the source of this cellphone app has been revealed. The company that made it is called Shadow, which is poor branding for a company involved in the Democratic process. They have produced an app that has not allowed the uploading of some results and the downloading of other results. This has forced paper backups and two hour wait times for caucus secretaries to phone in the results. All the campaigns are tallying their own results to try and force honesty. Buttigieg's campaign was claiming victory around midnight.

Shadow received it's funding from a non-profit SuperPAC called ACRONYM. ACRONYM paid $60,000 to Shadow to develop this app for the DNC and Buttigieg, er-- that was supposed to read Iowa and Nevada. As can be seen below from the Federal Election Commission website the Buttigieg gave a similar amount to Shadow last year: 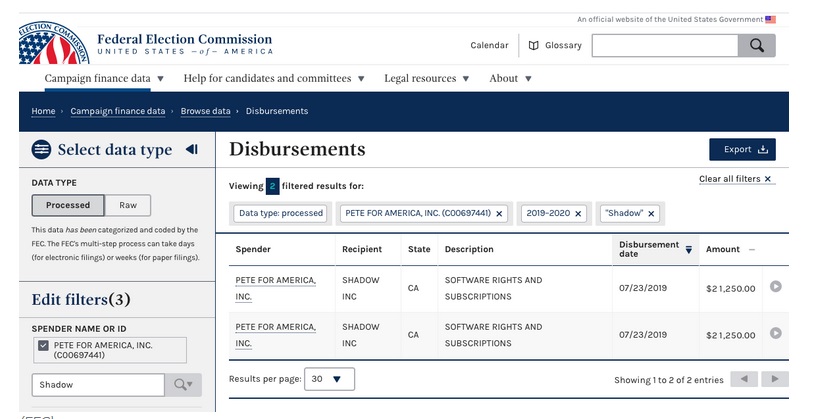 This is part one, where a candidate manages to remove a poll showing him way behind from publication surges suddenly in the voting counted on equipment that campaign paid for. This is direct provable collusion.

As a SuperPAC, ACRONYM has some interesting people involved. Their founder and CEO Tara McGowan is the former digital advertising head of Priorities USA, which spent $42 million backing Hillary Clinton's dismal failure of a White House bid in 2016. She also runs a weekly podcast that has repeatedly featured the DNC's chief technical officer, Clinton campaign veteran, and former Facebook employee Nell Thomas.

Another major part of the ACRONYM team is yet another former Facebook employee, James Barnes. Barnes was termed an “MVP” for the Trump campaign in 2016 by the Digital Director of Trump for President 2016 and Trump for President 2020 Gary Colby. This is truly reaching across the aisle in bi-partisan agreement on election outcomes.

Tatenda Musapatike is another Facebook alumni working at ACRONYM. Prior to both she worked at The New Media Firm. This digital campaign organization was founded by Will Robinson. Robinson was the AAPC Democratic Campaign Strategist of the Year for 2012. He started in politics in the 1980s on the Bill Bradley campaign and moved up to being National Campaign Director of the DNC from 1989 to 1992. There he help guide Bill Clinton to the white house and was instrumental in solidifying the clique the controls the Democratic Party to this day.

Rounding out the Facebook alumni at ACRONYM is political scientist and former digital researcher for the Pew Foundation Solomon Messing. Messing announced his “recent” acquisition by ACRONYM during the Iowa contest yesterday, February 3rd, on twitter while welcoming his fellow facebook alumni to the team. Messing's academic work focuses on political forecasting ahead of elections, which is especially relevant considering the distance between the claims of the Buttigieg campaign, the poll that the Buttigieg campaign helped suppress, the documented claims of other campaigns, and probable reality.

This kind of election fraud has been termed the “shave and puff”, where numbers are shaved from one candidate or district and then laundered by puffing up totals in other candidates and districts.

When this set of impossible results is combined with DNC loyalists, direct funding from a campaign, suppressed polls, and an app that can not perform simple addition, it appears that the establishment is on it's way to abandoning any pretense of an election.

Stay tuned for Nevada, where this app built by the DNC and facebook will count the “votes” again and tell us what the DNC wants us to believe.