Below is the results of the diligent work of our staff presented as a report on our often frustrated attempts to find the legal minimum level of transparency withing local government.

This is a report on the public records requests, practices, and results surrounding Yellow Springs Exempted Schools. It will attempt to be in chronological, with as much detail as possible.

On April 12th, that public records request was fulfilled, but only after being completely ignored until the request was posted to the “Yellow Springs Open Discussion” Facebook group. [1][2][3][4]

Looking through the files, the page detailing what the superintendent is indemnified from appears to be absent. 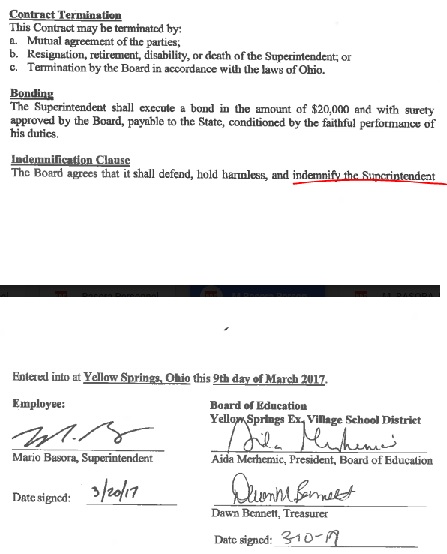 This is not a redaction it been a redaction it would be in black. Had there been no more text the sentence would have ended with a period. A page is missing, or the information has been whited out or removed, it is the complete absence of a page of a public official’s contract.

Krier’s personnel file contains a one page, heavily redacted,“Update on high school” email sent March 13th, 2018, within which Jack Hattert is appointed as interim High School Principal. Like Basora’s contract, a page seems to be missing. 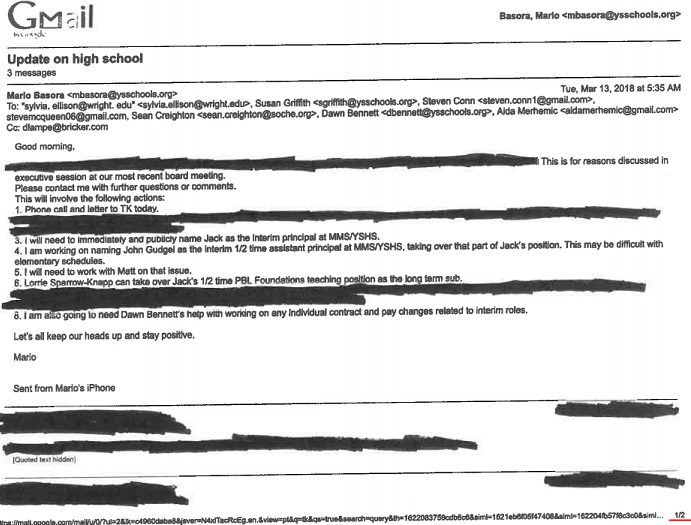 On March 14th, 2018, after Tim Krier was replaced by Jack Hattert, Tim Krier obtained a nurse’s note stating that “...Timothy Krier is unable to perform any of the essential functions of his job at this time. At this point, the period of recovery is expected to be extended and there is no way to estimate a return to work date. I have scheduled a follow up appointment in 6 weeks to re-evaluate him.” [5]

A letter dated March 15th, 2018, instructs Mr. Krier to schedule a time with Basora during the student-free weekend to “...collect all of your personal belongings from the school.”.[6] It is typical for staff and faculty of schools to return equipment and refrain from contacting students while on an extended leave of absence. However, being instructed to clean out their desk is unusual for someone who is eventually expected to return to work and could have returned to work as early as April 24th, 2018.[7] The last scheduled day for teachers is June 1st, 2018.[8]

There was nothing suspicious or odd to be noted in either Guidance Counselor Morano’s or Assistant Principal Jack Hattert’s personnel files. This is to be expected since they followed their duty to report[9] which indicated multiple students involved in the reported sexual offense.[10]

A miscellaneous incident CAD entry obtained in a request from the YSPD indicates that something happened at the high school as Officer Nipper was sent to pick up undescribed statements twelve days later.[11][12]

It the April 12th, 2018 Yellow Springs Board of Education meeting,[13] this reporter and another journalist, Micah Naziri, asked questions about the safety of Yellow Springs Schools, the mechanisms to prevent and address sexual assaults, and bullying.[14]

In the words of Yellow Springs News’ Carol Simmons: “The board did not reply to the comments, keeping its focus regarding high school personnel to routine business related to Principal Tim Krier’s leave, unanimously approving administrative actions taken in March.” The article was titled “School board sets limits on public comments.”[15]

This reporter also asked for the policy regarding threats of school shootings with a question regarding the length of time that there was a known sexual predator in their schools.

Not one member of the Yellow Springs School Board responded despite a police report detailing a threat being attached to the email.

When asked about an optional work session on April 26th, 2018, the president of the Yellow Springs school board revealed that “...according to our board policy you need to “register your intent” to the Superintendent 6 days before a board meeting if you’d like to add a topic to the agenda of a meeting. Our next board meeting is May 10. Include your name, address, group affiliation( if appropriate) and topic to be addressed. Requests are then subject to the approval of the Superintendent and Board President.”[16] (Emphasis added)

On top of Gerry Bello’s analysis of the board’s leadership protocols[17], this requirement of mutual agreement effectively means that the superintendent has veto power over elected officials in matters of the agenda.

Initially, the cost was estimated at 150$-200$, which seemed like a vain attempt to out-price the reports.[21] Electronic files were requested in lieu of hard copies. Fees are not permitted for electronic transmission of public records requests, which means they bypassed my request for non-fee email request then quoted an astronomical fee. Fees were waived.

A quick[25] perusal of Bussey’s personnel file[26] suggests that asking a member of the Yellow Springs Schools staff who in a contentious place to clean out their personal belongings is not standard procedure.[27]

Requests to Other Districts

This Mockingbird reporter attends the Antioch College Wellness Center at the same time that the superintendent does. On April 25th, after this reporter greeted him, Mr. Basora revealed that he knew of public records requests regarding himself submitted to his former district: Wyoming City Schools. This was before the records request was even fulfilled.

[Editor's note: As Editor in Chief of the Mockingbird I consider this act an attempt at intimidation regardless of the apparent tone. I am not amused. Gerry Bello]

I contacted the custodian of records for an explanation. The custodian responded, “Per the master contract between Wyoming City Schools and Wyoming Education Association...‘...[sic]Any request to view a member’s files will be communicated to the member by the Superintendent and/or Building Principal.’.” The contract does not explicitly state that former members of the district would be contacted, but the custodian of records indicated that such contact would be a courtesy when possible.[28]

This reporter was given a copy of the administrator salaries for the last 5 years[32] with great speed and told that there are no raises or salary increases promised to any administrators, as this is a facilities request.[33]

For the second item, there were no responsive records to indicate any advisement to district employees about what constitutes acceptable campaign practices.

For the third: “The Board does not oversee the election and there are no responsive records to this request”

For the fourth, consulting Burges and Burges was entirely by the Levy Committee. Total fees charged to Yellow Springs Schools by consultants to this project was $29,130 to Ruetschle Architects and $9,692 to WSU/APRI for School District Survey for facilities.[34]

Responding to a request for correspondence between Burges and Burges and Yellow Springs Schools since January 1st, 2018, this reporter was told by Treasurer Dawn Bennett that, “It is illegal for school employees to engage in [communication with consultants advertising for the levy] and to perform any levy committee work on school time.”[35] 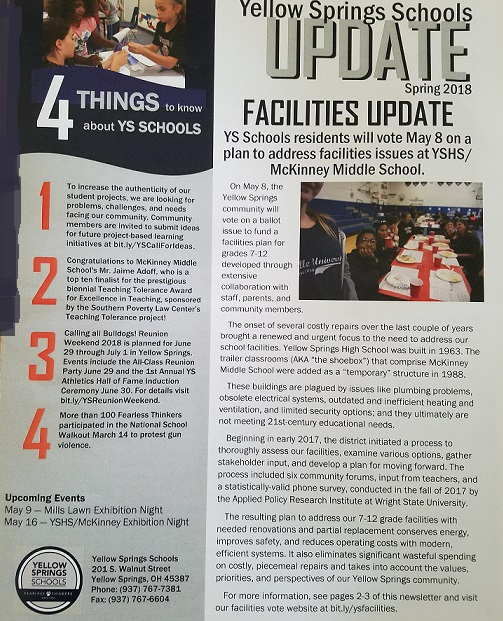 If anyone (Treasurer, Superintendent, Executive Assistant) copied on this email knew that the statement was untrue, they never bothered to correct the Administrative Assistant about her error to ensure this request was fulfilled.

Despite this, this reporter was able to quickly gather the data about the Levy Committee from the Greene County Board of Elections within the day.[38]

The results of the levy committee request show quite a lot of personal information[39][40], which should come as no surprise to anyone familiar with election procedure: Political Action Group names, addresses and phone numbers; voter registration information[41]; and campaign finance reports[42] are public information.

This reporter was sent this article, which did not really address the point that campaign finance and committee information is public information.[43] It is however correct about the contact information.

Interaction With the Public

The public officials of Yellow Springs Schools have blocking people who oppose the May 8th school levy in Yellow Spring’s Facebook discussion groups.[44] This amounts to censorship by a public official, as “blocked” members of Facebook cannot see or comment on their activities.[45] 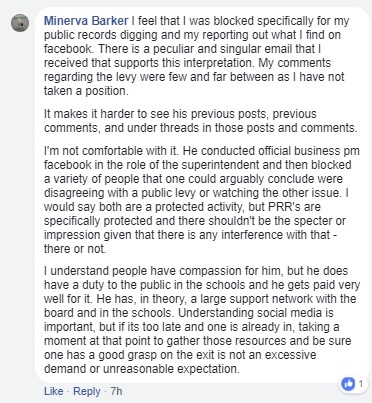 They have blocked administrators of the discussion groups. 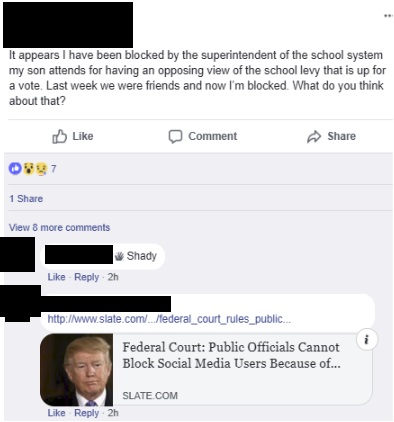 They have also blocked anyone else that dissents. 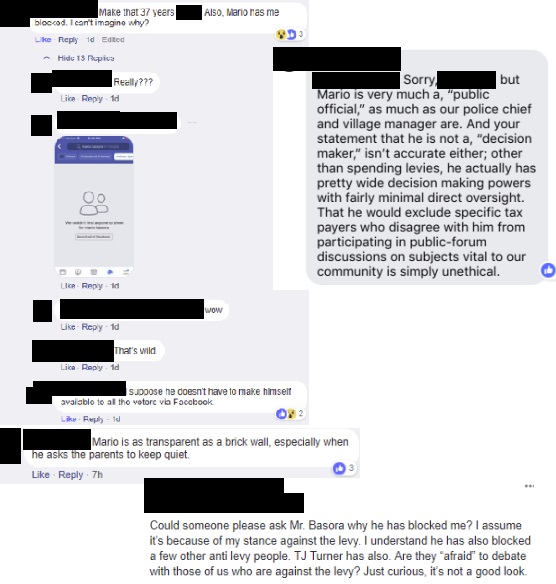 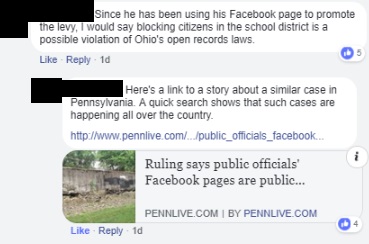 Between the odd dates for Krier’s departure, silence from the Board of Education[47], and incorrect information regarding election procedure, it’s hard to view this levy in a positive light.

It could be interpreted that there is a coverup of the Kriers’ misdeeds by poorly informed (at best) and purposefully obfuscating (at worst) public officials in an attempt to pass the levy. The Mockingbird is not the first to come to that conclusion, but the Mockingbird does have the most information.

It could be that the school board does not back the superintendent.

Some members of the community are worried about reprisals which will be taken out against their children. Community members have expressed these fears to our staff on more than one occasion.

Asked for the empty pages, the mockingbird received this response[48]: Which constitutes a flagrant violation of Ohio's public records law in writing. The entire school board was copied. 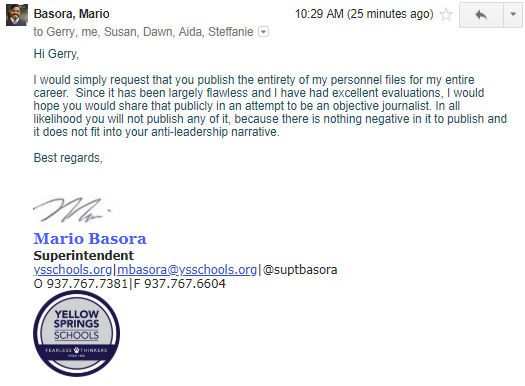 To which we respond that all the personnel files we received on the superintendent may be found here: https://drive.google.com/open?id=12npFdoxoaPn7QknRJB7ISzJqTObkPwQv

They are largely flawless. Except of course for this flagrant refusal of a request of public records.

Perhaps this is the first time he chose the wrong horse (Krier). In which case he would have chosen very wrong.

If the district’s administrators and representatives had simply been open forthcoming, this article would never have been written. Countless hours spent typing, sorting through emails, citing documents, and submitting public records requests would have been spent planning for the author’s upcoming wedding to his awesome fiance whom he loves very very much. [Editor's Note:  The Author put in VERY long hours of research and endured much to make this story possible. His upcomming wedding is something he very much looks forward to.]

This author is worried about reprisals against future children he plans to have should they be raised in a community where rapes in schools are covered up in the name of money and the prestige of a new school.

While schools are typically sacrosanct and unquestionably holy places within a community, Yellow Springs’ schools would benefit from more scrutiny.

[10]“A SECOND INCIDENT MAKES YELLOW SPRINGS A STEUBENVILLE ON THE LITTLE MIAMI” by Gerry Bello, 2018, http://www.mockingbirdpaper.com/content/second-incident-makes-yellow-springs-steubenville-little-miami

[25]Time was not available for a full reading. The full files will be reviewed at a future date.

[28]During November 2017, Superintendent Basora of Yellow Springs Schools attended a conference with the superintendent of Wyoming Schools, http://conference.ohioschoolboards.org/2017/wp-content/uploads/sites/17/2017/08/CC17Guide.pdf

[32]Salaries and Benefits of Admins, https://drive.google.com/open?id=0B8rzCeCzEPkvVEl0X3IxTVFBMWtHaU03UzZTNTBqbHRKT3BV

[37] "The law is clear - public dollars may not be used to promote school levies," Auditor Yost said. "All of Ohio's school districts must be careful not to cross the line from educational to promotional - and not knowing about an illegal expenditure doesn't make it legal." https://www.ralaw.com/media/alert/misuse-of-public-funds-for-levy-campaigns-2015-10-26/

[40] 30-D Comm for the Levy, https://drive.google.com/open?id=0B8rzCeCzEPkvOFZ5U2tzUXlwTTN5VEc5d3JyMUlzVHc5U2ow

[43] “Can I share this? What Sunshine Laws require” https://drive.google.com/open?id=0B8rzCeCzEPkvaWpmcFc4VDhlSTd0bEdqeXAzcW1va0J6QmhV